Damned Lies and Statistics: Untangling Numbers from the Media, Politicians, and Activists (Paperback) 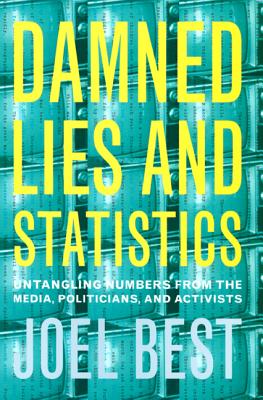 Damned Lies and Statistics: Untangling Numbers from the Media, Politicians, and Activists (Paperback)

Not on our shelves. Out of Print.
(This book is nonreturnable. Nonreturnable books may take up to 3 weeks to ship. All sales final.)
Does the number of children gunned down double each year? Does anorexia kill 150,000 young women annually? Do white males account for only a sixth of new workers? Startling statistics shape our thinking about social issues. But all too often, these numbers are wrong. This book is a lively guide to spotting bad statistics and learning to think critically about these influential numbers. Damned Lies and Statistics is essential reading for everyone who reads or listens to the news, for students, and for anyone who relies on statistical information to understand social problems. Joel Best bases his discussion on a wide assortment of intriguing contemporary issues that have garnered much recent media attention, including abortion, cyberporn, homelessness, the Million Man March, teen suicide, the U.S. census, and much more. Using examples from the New York Times, the Washington Post, and other major newspapers and television programs, he unravels many fascinating examples of the use, misuse, and abuse of statistical information. In this book Best shows us exactly how and why bad statistics emerge, spread, and come to shape policy debates. He recommends specific ways to detect bad statistics, and shows how to think more critically about "stat wars," or disputes over social statistics among various experts. Understanding this book does not require sophisticated mathematical knowledge; Best discusses the most basic and most easily understood forms of statistics, such as percentages, averages, and rates. This accessible book provides an alternative to either naively accepting the statistics we hear or cynically assuming that all numbers are meaningless. It shows how anyone can become a more intelligent, critical, and empowered consumer of the statistics that inundate both the social sciences and our media-saturated lives.
Joel Best is Professor and Chair of Sociology and Criminal Justice at the University of Delaware and author of Random Violence (California, 1999), among other books.