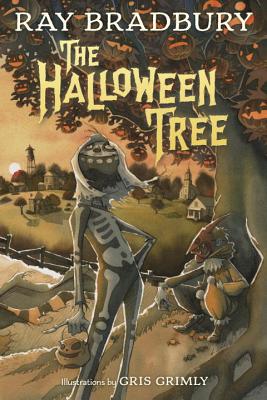 
Not on our shelves. Usually ships in 2-5 days.
In The Halloween Tree, master of fantasy Ray Bradbury takes readers on a riveting trip though space and time to discover the true origins of Halloween.

Originally published in 1972, this striking new hardcover edition features dramatic illustrations throughout by Gris Grimly, giving a new generation of readers a chance to discover the magic.
Ray Bradbury is considered one of America’s foremost writers of science fiction and fantasy. Among his most popular adult books are Fahrenheit 451 The Martian Chronicles, The Illustrated Man, Dandelion Wine, and Death Is a Lonely Business. He also wrote several books for children, including Switch on the Night. Ray Bradbury died in 2012.

Gris Grimly is the author and illustrator of several books for children as well as an art director, and the founder of Mad Creator Productions. His previous books include The Dangerous Alphabet by Neil Gaiman and Gris Grimly’s Frankenstein. Gris lives in Southern California with his family.
"If you want to know what Halloween is, or if you simply want an eerie adventure, take this mystery-history trip. You couldn't have a better guide than Ray Bradbury."--Boston Globe