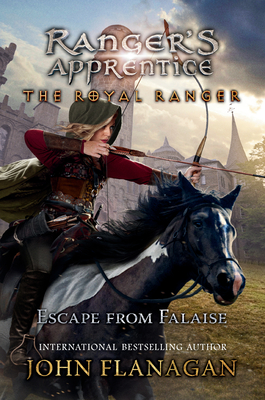 After their plan to rescue the prince of Gallica has gone horribly wrong, Will Treaty and his apprentice, Maddie, are being held captive at the Chateau des Falaises in Gallica. The dangerous baron Lassigny is intent on keeping them—and the prince—no matter what. But Will and Maddie are determined to escape.

If they ever want to return to their home, they’ll have to find ways to outwit the baron and get outside the locked tower. When friends from home endeavor to find their own way to help it seems escape is closer than ever. But the dirty tricks of the baron are no laughing matter.

Facing dangerous threats, battles with knights, and a new and risky plot to save the prince—the odds are stacked against them. But the Rangers will use all the tools of their trade to save themselves and save the day.

Internationally bestselling author of the Ranger's Apprentice and Brotherband series, John Flanagan returns in the captivating next installment of the Royal Ranger series: The Royal Ranger: Escape from Falaise. Perfect for fans of J.R.R. Tolkien, Brian Jacques's Redwall, and George R.R. Martin's Game of Thrones!
JOHN FLANAGAN grew up in Sydney, Australia, hoping to be an author, and after a successful career in advertising and television, he began writing a series of short stories for his son, Michael, in order to encourage him to read. Those stories would eventually become The Ruins of Gorlan, Book 1 of the Ranger's Apprentice epic. Now with his companion series, Brotherband, the novels of John Flanagan have sold millions of copies and made readers out of kids the world over. Mr. Flanagan lives in the suburb of Mosman, Australia, with his wife. In addition to their son, they have two grown daughters and four grandsons. You can visit John Flanagan at www.WorldofJohnFlanagan.com