I Can Be Anything! (Beginner Books(R)) (Hardcover) 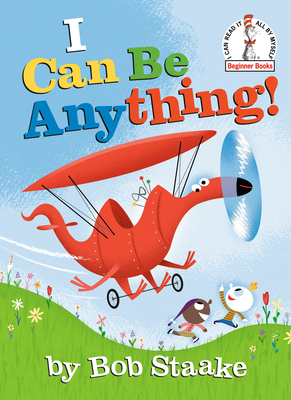 I Can Be Anything! (Beginner Books(R)) (Hardcover)


On Our Shelves Now. Click on title for location specific availability.
A shape-shifting lizard becomes anything he wants in this funny--and empowering--Beginner Book by award-winning illustrator Bob Staake!

The giant lizard star of Bob Staake's Beginner Book Can You See Me? is back--and this time, instead of changing colors, he's changing shapes. (Very un-lizard-like shapes, including a robot on a dairy cow, a surfboard for a whale, and a one-eyed, green-headed monster!) Featuring simple rhymed text and high-energy graphic-style illustrations, this cheerful, funny easy reader is exactly what Dr. Seuss had in mind when he launched the Beginner Books series in 1957 with The Cat in the Hat. What's more, Staake's charming lizard shares an empowering "You can do it!" message with young readers.
Bob Staake's 2006 Golden Book The Red Lemon was a New York Times Best Illustrated Children's Book of the Year. His 2008 Golden Book The Donut Chef received glowing reviews from The Wall Street Journal and Publishers Weekly. In addition to his work with Random House, Bob's titles include Mary Had a Little Lamp (Bloomsbury), Look! A Book! (Little Brown), and Cars, Galore (Candlewick). Outside of his work in children's publishing, Bob's illustrations have also been seen on several popular New Yorker covers, including the 11/17/08 "Reflection" cover that is officially the most popular New Yorker cover of all time. In 2008, Bob was the recipient of Time magazine's 2008 Best Magazine Cover award.