A Child Is Born: The fifth edition of the beloved classic--completely revised and updated (Paperback) 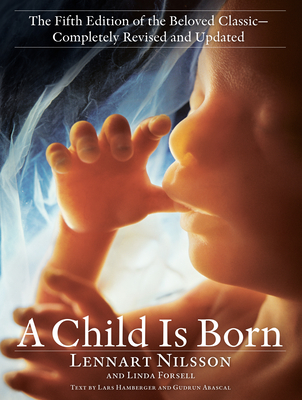 A Child Is Born: The fifth edition of the beloved classic--completely revised and updated (Paperback)


On Our Shelves Now. Click on title for location specific availability.
The miracle of life—for a new generation. The completely revised fifth edition of the beloved classic offers an astonishing glimpse of the world within the womb alongside authoritative advice for expectant parents.

Deep inside a woman’s body, a miracle occurs. An egg and sperm meet and a new human being is created. Through the unique photographs of Lennart Nilsson, we see the fascinating process of fertilization unfold and watch as an embryo develops from a tiny cluster of cells into a fetus, growing and maturing day by day until the time comes to meet the world outside the womb. The book also describes pregnancy from a parent's perspective, diving into maternity care, health during pregnancy, prenatal testing, and labor and delivery.

First published nearly fifty years ago, A Child Is Born broke astonishing new ground, bringing the magic of pregnancy and birth to life. This is the fifth edition of the beloved international classic, which teams Nilsson’s classic medical photographs with new documentary photographs by Linda Forsell and a revised text by professor Lars Hamberger and midwife Gudrun Abascal.
Lennart Nilsson (1922–2017) is one of the foremost figures in the history of photography. Working with medical researchers and using advanced, custom-built equipment, he documented the inner workings of the human body down to the cellular level. Above all, he dedicated his career to capturing life in the womb from the moment of fertilization until birth. He received numerous distinctions and honors and his work has entered the collections of major museum and institutions.

Linda Forsell is an award-winning freelance photojournalist from Stockholm. Between 2011 and 2015 she was based in New York and covered the North American continent for major Scandinavian news outlets. Her photos have been published in international magazines and shown at exhibitions worldwide.

Lars Hamberger is professor emeritus of obstetrics and gynecology at the University of Gothenburg. He is the author of the most recent editions of A Child Is Born and served as a medical expert and consultant to Lennart Nilsson on these books as well as other scientific book and film projects.

Gudrun Abascal is a senior midwife with over forty years’ experience in maternity care. In her daily work she has helped and supported innumerable parents through pregnancy and childbirth. She has written books for expectant parents as well as health care professionals. She has founded maternity clinics that have helped to change and improve healthcare for expectant mothers.