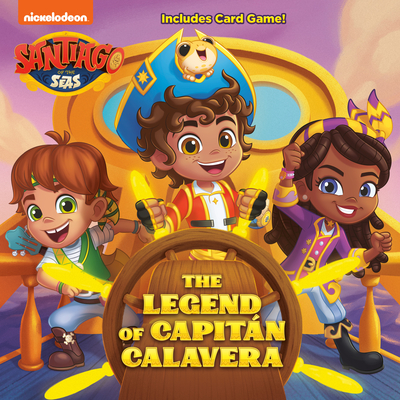 
On Our Shelves Now. Click on title for location specific availability.
Set sail for adventure with Santiago and his pirate crew from Nickelodeon's new animated show Santiago of the Seas in this full-color storybook with a card game!

A day at the beach becomes magical when Santiago from Nickelodeon's Santiago of the Seas discovers the lost treasure of the legendary Capitán Calavera. It turns him and his friends Tomás and Lorelai into the new Pirate Protectors of their home, Isla Encanto-but can they protect the treasure from selfish pirate Bonnie Bones? Children ages 3 to 7 will be thrilled by this exciting storybook with card game!

Santiago of the Seas is an interactive action-adventure series for preschoolers starring Santiago Montes, an 8-year old boy who discovers the mystical compass of fabled pirate Capitán Calavera, making him the next Pirate Protector of the High Seas. Along with his crew, cousin Tomás and Lorelai the mermaid, Santiago goes on heroic quests against nefarious villains and proves that kindness and good deeds can always save the day!
Melissa Lagonegro is a children’s book author. Her works include A Tale of Two Sisters (Disney Frozen), Belle's Story (Disney Princess), and Big Friend, Little Friend (Disney Princess).

Established in July 2013 in a merger between Penguin and Random House, Penguin Random House, with nearly 250 independent imprints and brands on five continents, more than 15,000 new titles published each year, and close to 800 million print, audio, and eBooks sold annually, is the world’s leading trade book publisher. Like its predecessor companies, Penguin Random House is committed to publishing adult and children’s fiction and nonfiction print editions and is a pioneer in digital publishing. Its publishing lists include more than 60 Nobel Prize laureates and hundreds of the world’s most widely read authors.