Above the Reich: Deadly Dogfights, Blistering Bombing Raids, and Other War Stories from the Greatest American Air Heroes of World War II, in Their Own Words (Hardcover) 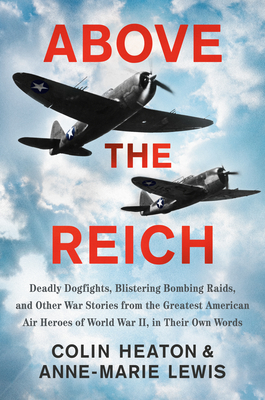 Above the Reich: Deadly Dogfights, Blistering Bombing Raids, and Other War Stories from the Greatest American Air Heroes of World War II, in Their Own Words (Hardcover)


On Our Shelves Now. Click on title for location specific availability.
Sensational eyewitness accounts from the most heroic and legendary American aviators of World War II, never before published as a book

They are voices lost to time. Beginning in the late 1970s, five veteran airmen sat for private interviews. Decades after the guns fell silent, they recounted in vivid detail the most dangerous missions that made the difference in the war. Ed Haydon dueled with the deadliest of German aces—and forced him to the ground. Robert Johnson racked up twenty-seven kills in his P-47 Thunderbolt, but nearly lost his life when his plane was shot to ribbons and his guns jammed. Cigar-chomping Curtis LeMay was the Air Corps general who devised the bomber tactics that pummeled Germany's war machine. Robin Olds was a West Point football hero who became one of the most dogged, aggressive fighter pilots in the European theater, relentlessly pursuing Germans in his P-38 Lightning. And Jimmy Doolittle became the most celebrated American airman of the war—maybe even of all time—after he led the audacious raid to bomb Tokyo. Today these heroes are long gone, but now, in this incredible volume, they tell their stories in their own words.
Colin Heaton is a military historian, former soldier and Marine sniper, professor, and specialist in interviewing military veterans. Anne-Marie Lewis holds a BA from American Military University (Hon) in International Relations Conflict Resolution and Peacekeeping and an MA in International Relations National Security Issues and Counterterrorism. She has worked as a photographer with the Doolittle Raiders, Black Sheep, and Tuskegee Airmen and has been featured in both publications and advertising. She has also co-authored several military histories and biographies. A South Carolina native, she currently works in Cybersecurity in Atlanta, Georgia.
"Readers with military background in general, and interest in and knowledge of the war in particular, will welcome and applaud this revealing history. Readers encountering information about the war for the first time may have their eyeballs pop out on springs. . . . The text pulls you along like an action/adventure novel, owing to the vivid voices of these five men and the obstacles they had to overcome. At the same time, it feels like you’re sitting in the same room with them hearing the stories firsthand."
—New York Journal of Books

"Colin Heaton has once again produced a series of first-person accounts from the men who made aviation history. . . . An invaluable addition to military history."
—Adam Makos, New York Times bestselling author of A Higher Call and Spearhead

"Among the top tier of World War II histories."
—Jay A. Stout, author of Hell's Angels