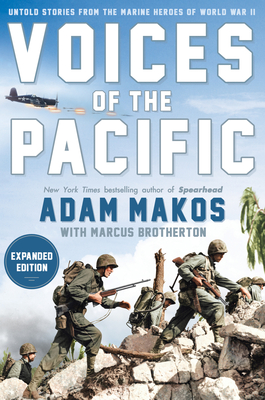 
On Our Shelves Now. Click on title for location specific availability.
From the bestselling author of A Higher Call and Spearhead comes an unflinching firsthand chronicle of the heroic US Marines who fought on Guadalcanal, Peleliu, Iwo Jima, and in other pivotal battles during the Pacific War, a classic book now expanded with new stories from the flyboys overhead and the home front at war.

Following fifteen Marines from Pearl Harbor, through their battles with the Japanese, to their return home after V-J Day, Adam Makos and Marcus Brotherton have compiled an oral history of the Pacific War in the words of the men who fought on the front lines. With vivid, unforgettable detail, these Marines reveal harrowing accounts of combat with an implacable enemy, the camaraderie they found, the friends they lost, and the aftermath of the war's impact on their lives.

With unprecedented access to the veterans, rare photographs, and unpublished memoirs, Voices of the Pacific presents true stories of heroism as told by such World War II veterans as Sid Phillips, R.V. Burgin, and Chuck Tatum—whose exploits were featured in the classic HBO miniseries The Pacific—and their Marine buddies from the legendary 1st Marine Division.
Hailed as "a masterful storyteller" by the Associated Press, Adam Makos is the author of the New York Times bestseller Spearhead, the critically acclaimed Devotion, and the national bestselling classic A Higher Call. Inspired by his grandfathers' service, Adam chronicles the stories of American veterans in his trademark fusion of intense human drama and close-up military action, securing his place "in the top ranks of military writers," according to the Los Angeles Times. In the course of his research, Adam has flown a WWII bomber, accompanied a Special Forces raid in Iraq, and journeyed into North Korea in search of an MIA American serviceman.

Marcus Brotherton is a journalist and professional writer known for his collaborations with high-profile public figures, humanitarians, inspirational leaders, and military veterans. He has authored or coauthored more than twenty-five books including We Who Are Alive and Remain, A Company of Heroes, Shifty's War, and Call of Duty.