Uni the Unicorn in the Real World (Hardcover) 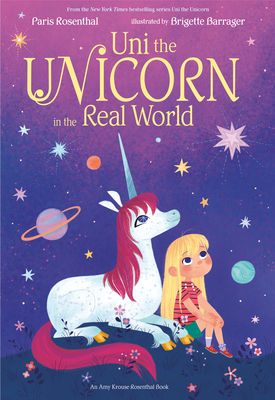 Uni the Unicorn in the Real World (Hardcover)


On Our Shelves Now. Click on title for location specific availability.
Uni the Unicorn, the only unicorn who believes kids are real, slides down a double rainbow to visit friends on earth.

Uni the Unicorn visits her best friend in the real world. Now everyone will know that unicorns exist, and that Uni is real after all.

But when the little girl introduces Uni to her family and friends, they can't see the unicorn.

Then, with the power of believing and Uni's magic horn, one little boy begins to see something. And then all the kids begin to believe in magic. And as the real world grows brighter and brighter, all kinds of other magical creatures appear, ending the book with the most dazzling array of imaginary creatures.

Paris Rosenthal, the daughter of the late Amy Krouse Rosenthal, wrote this as a tribute to her mom.

Paris Rosenthal grew up in Chicago, and yes she is named after the city of Paris. Her published works include #1 New York Times bestseller Dear Girl, co-written with her late mother, Amy Krouse Rosenthal and #1 New York Times bestseller Dear Boy, co-written with her father, Jason B. Rosenthal. She also wrote the New York Times Bestseller, Dear Teacher, as well as Dear Baby, Project 1, 2, 3, and Uni the Unicorn in the Real World. Aside from writing, Paris is passionate about music, yoga, soccer, and organizing.


BRIGETTE BARRAGER graduated from CalArts with a BFA in character animation. She likes tea and books and general old lady-ish stuff, and hates when people's toes hang over the edge of their sandals. Visit her at brigetteb.blogspot.com.