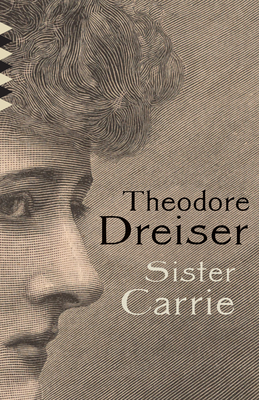 
On Our Shelves Now. Click on title for location specific availability.
This landmark novel about a small-town girl who runs away to the big city has been hailed as one of the greatest portraits of urban life in American literature.

When Theodore Dreiser's epic first novel stormed onto the literary scene in 1900, it was a breath of fresh air in more ways than one. Celebrated for the vibrant and gritty realism of its portrayal of city life, Sister Carrie also gave the world an unforgettable heroine—a thoroughly modern young woman who turned the traditional cautionary tale of the fallen woman on its head.

When Carrie Meeber runs away to Chicago, she has nothing to rely on but her beauty and a fierce determination to improve her life. She escapes work in a factory by becoming the mistress of first one man and then a more successful one but ultimately leaves them behind for success and fame on the stage in New York.

Long hailed as one of the best novels of the twentieth century, Sister Carrie provides a panoramic view of the dynamic and relentless forces that still drive city life and American culture.
THEODORE DREISER was born in Terre Haute, Indiana, in 1871. After a poor and difficult childhood, Dreiser broke into newspaper work in Chicago in 1892. A successful career as a magazine writer in New York during the late 1890s was followed by his first novel, Sister Carrie, in 1900. Over the next two decades he published works in a number of literary forms, and his 1925 novel, An American Tragedy, brought him universal acclaim. Dreiser died in Los Angeles in 1945.