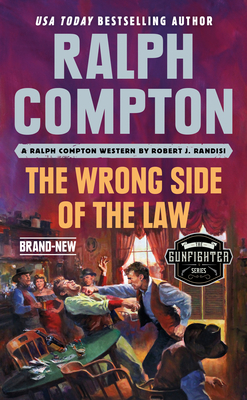 
On Our Shelves Now
In this fast-paced new installment in bestselling author Ralph Compton's Gunfighter series, a bandit who takes the identity of a dead lawman finds that the best place to hide is in plain sight.

Jake Polk is a wanted man. He's spent years on the wrong side of the law staying one step ahead of the marshals. His most recent stage robbery ends with a posse hot on his trail. He's opened up just enough room to take a breather when he stumbles upon something astonishing. It's the body of a man resting peacefully next to a burned-out campfire. It's clear the man died in his sleep of natural causes. This is the chance Jake has been waiting for.

According to a letter in the man's saddlebag, he's Marshall Owen Dent, on his way to the town of Riverbend to take over as the local lawman. Jake switches identities to avoid the posse, but what starts out as a quick means of escape may have deeper consequences when Jake considers making the change permanent.
Ralph Compton stood six foot eight without his boots. He worked as a musician, a radio announcer, a songwriter, and a newspaper columnist. His first novel, The Goodnight Trail, was a finalist for the Western Writers of America Medicine Pipe Bearer Award for best debut novel. He was the USA Today bestselling author of the Trail of the Gunfighter series, the Border Empire series, the Sundown Riders series, and the Trail Drive series, among others.
Robert J. Randisi has authored more than five hundred published books and has edited more than thirty anthologies of short stories. Booklist magazine said he "may be the last of the pulp writers." He cofounded and edited Mystery Scene magazine and cofounded the American Crime Writers League. He founded the Private Eye Writers of America in 1981, where he created the Shamus Award.