Jackie Robinson: He Led the Way (Step into Reading) (Paperback) 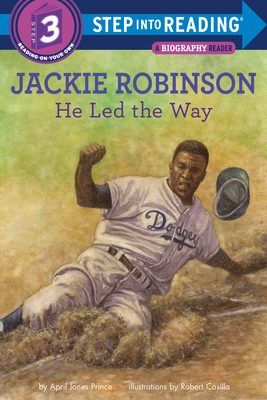 Jackie Robinson: He Led the Way (Step into Reading) (Paperback)


On Our Shelves Now. Click on title for location specific availability.
Perfect for Black History Month and sports fans! Independent readers will be inspired by the story of this barrier-breaking baseball player. Now available in Step into Reading, the premier leveled reader line.

Jackie Robinson became the first black Major League baseball player of the modern era when he stepped onto the field as a Brooklyn Dodger in 1947. In simple, engaging language, this book follows Jackie from childhood through his career as an MVP-award winning baseball player and a hero of the civil rights movement.

Step 3 Readers feature engaging characters in easy-to-follow plots about popular topics; for children who are ready to read on their own.
APRIL JONES PRINCE is a children's book author and freelance editor.

ROBERT CASILLA is an American artist and illustrator of award-winning children's books. He has illustrated over 30 children's books, including biographies and multicultural stories. His illustrations are influenced by his Latino background.