House of Roots and Ruin (SISTERS OF THE SALT) (Hardcover) 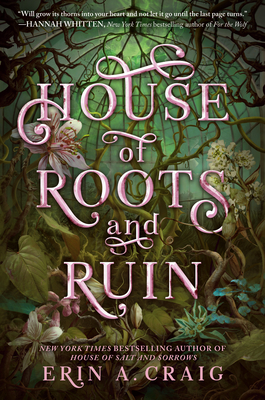 House of Roots and Ruin (SISTERS OF THE SALT) (Hardcover)

By Erin A. Craig

Schuler Books is excited to partner with Erin to offer signed and personalised copies of House of Roots and Ruin! Please put any signing and personalization requests in the "Order Comments" box during checkout.

Orders of House of Roots and Ruin placed by July 21st will ship on release day.

A modern masterpiece, this is a classic Gothic thriller-fantasy from New York Times bestselling author Erin A. Craig, about doomed love, menacing ambition, and the ghosts that haunt us forever.

In a manor by the sea, one sister is still cursed.

Despite dreams of adventures far beyond the Salann shores, seventeen-year-old Verity Thaumas has remained at her family’s estate, Highmoor, with her older sister Camille, while their sisters have scattered across Arcannia.

When their sister Mercy sends word that the Duchess of Bloem—wife of a celebrated botanist—is interested in having Verity paint a portrait of her son, Alexander, Verity jumps at the chance, but Camille won’t allow it. Forced to reveal the secret she’s kept for years, Camille tells Verity the truth one day: Verity is still seeing ghosts, she just doesn’t know it.

Stunned, Verity flees Highmoor that night and—with nowhere else to turn—makes her way to Bloem. At first, she is captivated by the lush, luxurious landscape and is quickly drawn to charming, witty, and impossibly handsome Alexander Laurent. And soon, to her surprise, a romance . . . blossoms.

But it’s not long before Verity is plagued with nightmares, and the darker side of Bloem begins to show through its sickly-sweet façade. . . .
Erin A. Craig is the New York Times bestselling author of House of Salt and Sorrows and Small Favors. She has always loved telling stories. After getting her BFA in Theatre Design and Production from the University of Michigan, she stage-managed tragic operas filled with hunchbacks, séances, and murderous clowns, then decided she wanted to write books that were just as spooky. An avid reader, an embroidery enthusiast, a rabid basketball fan, and a collector of typewriters, Erin makes her home in West Michigan with her husband and daughter.
Praise for House of Roots and Ruin:

"Another triumph by Craig, a twisty gothic romance that drew me in from the first sentence. There's something comforting about stepping into Craig's worlds, she crafts them well, and they're so suffused with light that the darkness comes as a surprise. I'll be recommending this one everywhere."—Kendare Blake, #1 NYT Bestselling author of Three Dark Crowns

"I was utterly consumed by House of Roots and Ruin. It was the beautifully dark Gothic fantasy I've been waiting for."—Megan Shepherd, NYT bestselling author of Grim Lovelies