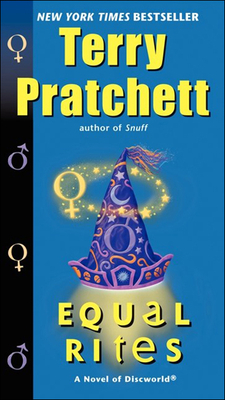 Every world has its rules--even a flat onecarried by four elephants riding on a giant turtle. That's why a dying wizard is searching for an eighth son of an eighth son to bestow his wizardly powers upon before meeting Deathin six minutes. Unfortunately it is quicklydiscovered--though not quite quickly enough--that the newborn babe the wizard anoints just before bidding the Discworld adieu is, in reality, a girl What's done cannot be undone--despiteold Granny Weatherwax's attempts to bringthe child into the witchy fold--and little Eskis now a wizard, through and through. And she's destined to bring chaos and confusion to the all-male faculty of Ankh-Morpork'sUnseen University . . . who are alreadyfairly addled to begin with.

TERRY PRATCHETT is the acclaimed creator of the global bestselling Discworld series, the first of which, The Colour of Magic, was published in 1983. In all, he is the author of fifty bestselling books. His novels have been widely adapted for stage and screen and he is the winner of multiple prizes, including the Carnegie Medal, as well as being awarded a knighthood for services to literature. Worldwide sales of his books now stand at 70 million, and they have been translated into thirty-seven languages.