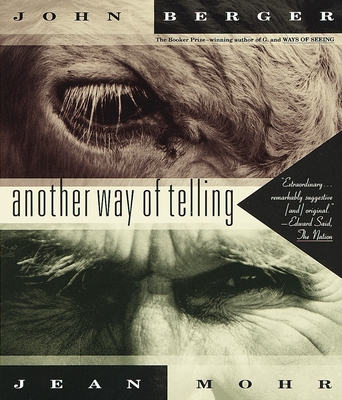 
Not on our shelves. Usually ships in 2-5 days.
“There are no photographs which can be denied. All photographs have the status of fact. What is to be examined is in what way photography can and cannot give meaning to facts.” With these words, two of our most thoughtful and eloquent interrogators of the visual offer a singular meditation on the ambiguities of what is seemingly our straightforward art form.

As constructed by John Berger and the renowned Swiss photographer Jean Mohr, that theory includes images as well as words; not only analysis, but anecdote and memoir. Another Way of Telling explores the tension between the photographer and the photographed, between the picture and its viewers, between the filmed moment and the memories that it so resembles. Combining the moral vision of the critic and the practical engagement of the photographer, Berger and Moher have produced a work that expands the frontiers of criticism first charged by Walter Benjamin, Roland Barthes, and Susan Sontag.
John Berger was born in London in 1926. He is well known for his novels and stories as well as for his works of nonfiction, including several volumes of art criticism. His first novel, A Painter of Our Time, was published in 1958, and since then his books have included Ways of Seeing, the fiction trilogy Into Their Labours, and the novel G., which won the Booker Prize in 1972. In 1962 he left Britain permanently, and lived in a small village in the French Alps. He died in 2017.
"Extraordinary... remarkable... suggestive/and/original." -- Edward Said, The Nation.

"One of the world's most influential art, critics ... Berger sees clearly with fresh surprise yet profound understanding." -- The Washington Times