Among the Barons (Shadow Children #4) (Hardcover) 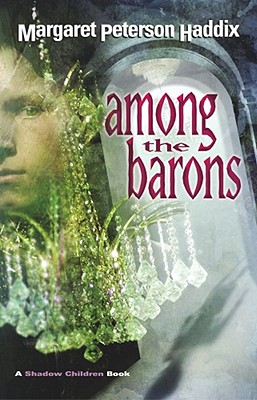 Among the Barons (Shadow Children #4) (Hardcover)

This is book number 4 in the Shadow Children series.

Smits had nothing left of his brother.
He was gone.
And Luke had taken his name.
How could anyone hear Smits sobbing and think he was merely a foolish, homesick kid? Luke knew what grief was like....What if Oscar suddenly understood, too?
Smits's grief was dangerous. Smits's grief could kill Luke.

As a third child in a society that allows only two children per family, Luke Garner was in hiding for the first twelve years of his life. Then he was given the freedom of an identity card that had belonged to Lee Grant, a Baron (a member of the highest class of society), and was sent to boarding school as Lee. But now, just when things are finally starting to go right, Lee's little brother, Smits, arrives at school, and Luke finds himself caught in a web of lies that gets more complex with every passing day -- and possibly even lethal. Can Luke trust the grief-stricken Smits to keep Luke's secret? And can he trust Smits's menacing bodyguard, Oscar?
Luke finds that living among the Barons puts him in the deadliest danger he has ever faced.
As she did in Among the Hidden and the other Shadow Children books, Margaret Peterson Haddix depicts one individual trying to make sense of a world in which nothing is what it seems.
Margaret Peterson Haddix is the author of many critically and popularly acclaimed YA and middle grade novels, including the Children of Exile series, The Missing series, the Under Their Skin series, and the Shadow Children series. A graduate of Miami University (of Ohio), she worked for several years as a reporter for The Indianapolis News. She also taught at the Danville (Illinois) Area Community College. She lives with her family in Columbus, Ohio. Visit her at HaddixBooks.com.