Among the Brave (Shadow Children #5) (Paperback) 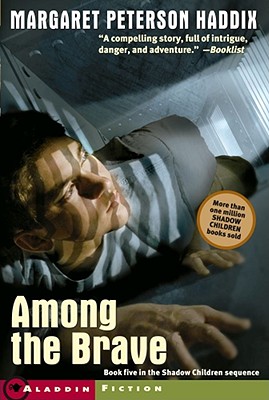 Among the Brave (Shadow Children #5) (Paperback)

This is book number 5 in the Shadow Children series.

Trey may have saved Luke's life, but he still thinks of himself as a coward who can barely stand to be outdoors. Now Trey finds out Luke has been taken prisoner at Population Police headquarters. Trey is terrified, but he knows that if he doesn't rescue his friend, no one will.
At police headquarters, Trey impersonates an officer to try getting to Luke. But just when it looks like he's close, Trey suddenly finds himself in danger of exposing not just himself but all shadow children.
Margaret Peterson Haddix is the author of many critically and popularly acclaimed YA and middle grade novels, including the Children of Exile series, The Missing series, the Under Their Skin series, and the Shadow Children series. A graduate of Miami University (of Ohio), she worked for several years as a reporter for The Indianapolis News. She also taught at the Danville (Illinois) Area Community College. She lives with her family in Columbus, Ohio. Visit her at HaddixBooks.com.
"A compelling story, full of intrigue, danger, and adventure."
-- Booklist

"The level of tension barely lets up, ensuring that 'can't-put-it-down' headlong impulse to keep reading."
-- Booklist