Among the Enemy (Shadow Children #6) (Paperback) 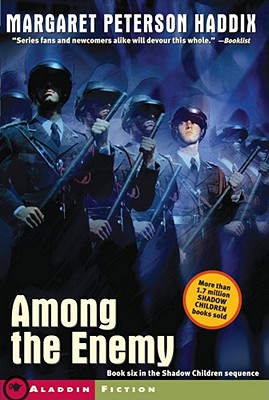 Among the Enemy (Shadow Children #6) (Paperback)

This is book number 6 in the Shadow Children series.

Matthias, an illegal third child, is caught in the cross fire between rebels and the Population Police. When he unwittingly saves a Population Police officer, Matthias is brought to Population Police headquarters to train as an officer himself. There he meets Nina, another third-born who enlists his help in a plot to undermine the Population Police. But Matthias is under constant scrutiny, and he has no idea whom he can trust. What can one boy do against a wicked bureaucracy?
Margaret Peterson Haddix is the author of many critically and popularly acclaimed YA and middle grade novels, including the Children of Exile series, The Missing series, the Under Their Skin series, and the Shadow Children series. A graduate of Miami University (of Ohio), she worked for several years as a reporter for The Indianapolis News. She also taught at the Danville (Illinois) Area Community College. She lives with her family in Columbus, Ohio. Visit her at HaddixBooks.com.