Among the Free (Shadow Children) (Paperback) 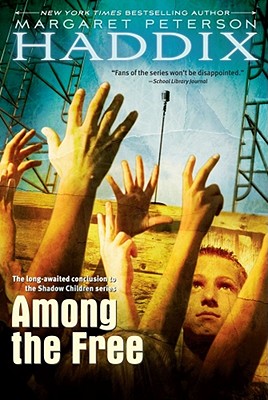 Among the Free (Shadow Children) (Paperback)

This is book number 7 in the Shadow Children series.

Luke Garner is a third-born in a restrictive society that allows only two children per family. Risking his life, he came out of hiding to fight against the Population Police laws. Now, in the final volume of Margaret Peterson Haddix's suspenseful Shadow Children series, Luke inadvertently sets off a rebellion that results in the overthrow of the government. The people are finally free. But who is in charge now? And will this new freedom be everything they had hoped?
Margaret Peterson Haddix is the author of many critically and popularly acclaimed YA and middle grade novels, including the Children of Exile series, The Missing series, the Under Their Skin series, and the Shadow Children series. A graduate of Miami University (of Ohio), she worked for several years as a reporter for The Indianapolis News. She also taught at the Danville (Illinois) Area Community College. She lives with her family in Columbus, Ohio. Visit her at HaddixBooks.com.
"Fans of the series won't be disappointed."