Land of Wondrous Cold: The Race to Discover Antarctica and Unlock the Secrets of Its Ice (Paperback) 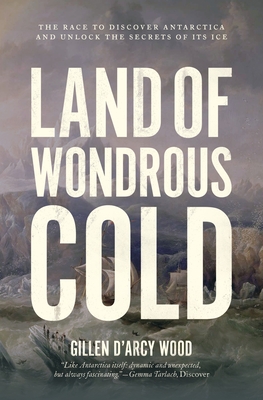 Land of Wondrous Cold: The Race to Discover Antarctica and Unlock the Secrets of Its Ice (Paperback)

A gripping history of the polar continent, from the great discoveries of the nineteenth century to modern scientific breakthroughs

Antarctica, the ice kingdom hosting the South Pole, looms large in the human imagination. The secrets of this vast frozen desert have long tempted explorers, but its brutal climate and glacial shores notoriously resist human intrusion. Land of Wondrous Cold tells a gripping story of the pioneering nineteenth-century voyages, when British, French, and American commanders raced to penetrate Antarctica's glacial rim for unknown lands beyond. These intrepid Victorian explorers--James Ross, Dumont D'Urville, and Charles Wilkes--laid the foundation for our current understanding of Terra Australis Incognita. Today, the white continent poses new challenges, as scientists race to uncover Earth's climate history, which is recorded in the south polar ice and ocean floor, and to monitor the increasing instability of the Antarctic ice cap, which threatens to inundate coastal cities worldwide. Interweaving the breakthrough research of the modern Ocean Drilling Program with the dramatic discovery tales of its Victorian forerunners, Gillen D'Arcy Wood describes Antarctica's role in a planetary drama of plate tectonics, climate change, and species evolution stretching back more than thirty million years. An original, multifaceted portrait of the polar continent emerges, illuminating our profound connection to Antarctica in its past, present, and future incarnations. A deep-time history of monumental scale, Land of Wondrous Cold brings the remotest of worlds within close reach--an Antarctica vital to both planetary history and human fortunes.
Gillen D'Arcy Wood is professor of environmental humanities at the University of Illinois, Urbana-Champaign, where he serves as associate director of the Institute for Sustainability, Energy, and the Environment. He is the author of Tambora: The Eruption That Changed the World (Princeton). Originally from Australia, he lives in Urbana, Illinois, with his wife and two children.