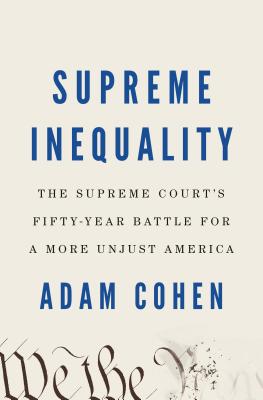 
Email or call for availability information.
“Meticulously researched and engagingly written . . . a comprehensive indictment of the court’s rulings in areas ranging from campaign finance and voting rights to poverty law and criminal justice.” —Financial Times

A revelatory examination of the conservative direction of the Supreme Court over the last fifty years.

In Supreme Inequality, bestselling author Adam Cohen surveys the most significant Supreme Court rulings since the Nixon era and exposes how, contrary to what Americans like to believe, the Supreme Court does little to protect the rights of the poor and disadvantaged; in fact, it has not been on their side for fifty years. Cohen proves beyond doubt that the modern Court has been one of the leading forces behind the nation’s soaring level of economic inequality, and that an institution revered as a source of fairness has been systematically making America less fair.

A triumph of American legal, political, and social history, Supreme Inequality holds to account the highest court in the land and shows how much damage it has done to America’s ideals of equality, democracy, and justice for all.
Adam Cohen, who served as a member of the New York Times editorial board and as a senior writer for Time magazine, is the author of Imbeciles: The Supreme Court, American Eugenics, and the Sterilization of Carrie Buck and Nothing to Fear: FDR's Inner Circle and the Hundred Days That Created Modern America. A graduate of Harvard Law School, he was president of volume 100 of the Harvard Law Review.
One of the "14 New Books to Watch For in February" from The New York Times

“Cohen’s sweeping review is impressive and necessary. . . . Supreme Inequality makes an important contribution to our understanding of both the Supreme Court and the law of poverty.” —New York Times Book Review

“Meticulously researched and engagingly written, Supreme Inequality is a howl of progressive rage against the past half-century of American jurisprudence. Cohen . . . builds a comprehensive indictment of the court’s rulings in areas ranging from campaign finance and voting rights to poverty law and criminal justice.” —Financial Times

“Cohen’s ambitious, well-written book makes a convincing case that the court has contributed to growing inequality through its rulings on everything from election law and education to corporate law and crime.” —Christian Science Monitor

“[A] tour guide such as Mr. Cohen is invaluable. He understands both the ‘what’ and the ‘why’ of the court’s past 50 years. Whereas the average citizen might feel that the Supreme Court ‘ensures fairness for all,’ Mr. Cohen’s book demonstrates how it has become a ‘court of the 1 percent, not the 99 percent.’” —Pittsburgh Post-Gazette

“Cohen persuasively argues that . . . [the] Supreme Court helped to create the income inequality that has become a defining (and grotesque) feature of contemporary America. His trenchant, gripping, and surprisingly accessible account guides readers through a slew of ruinous rulings that warped the Constitution.” —American Prospect

“Cohen’s lucid writing makes even the most difficult court cases understandable as he expertly details the evolution of the law in areas as diverse as the workplace, criminal law, campaign contributions and the corporate boardroom. Cohen’s greatest strength, however, is his ability to explain clearly and urgently how the court, supposedly the least political of the three branches of the government, has relentlessly pursued a political agenda that has made Americans less equal and less secure.” —BookPage

“Weaving legal, political, and social history, Cohen creates a richly detailed, but accessible, account for all interested in the personalities and politics that have shaped and are continuing to shape not only the U.S. criminal justice system but also the fabric of American life. A must-read.” —Library Journal, starred review

“With Supreme Inequality, Adam Cohen has built, brick by brick, an airtight case against the Supreme Court of the last half-century. With his trademark precision and broad sweep, Cohen proves that the high court has created one system of legal protections for America’s wealthy corporate interests and a second for the poor and middle classes. By limiting the Warren Court’s ﬂedgling efforts to protect workers, schoolchildren, criminal defendants, and voting rights, while inventing new protections for millionaire donors, big businesses, and polluters, the court has steadily contributed to the tragic inequality that is hollowing out the American system of justice. Cohen’s book is a closing statement in the case against an institution tasked with protecting the vulnerable, which has emboldened the rich and powerful instead.” —Dahlia Lithwick, senior editor, Slate

“Brown v. Board? Roe v. Wade? Sure. But with Supreme Inequality you dig down and understand the real direction of the Court over the last ﬁve-plus decades. It’s imperative. And you can’t put it down—with not just the law but the stories behind the law. Don’t miss it.”  —Peter Edelman, Carmack Waterhouse Professor of Law and Public Policy, Georgetown University Law Center