The Clown Said No (Hardcover) 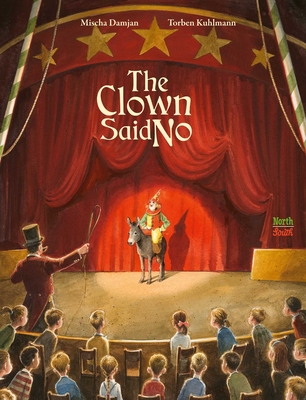 The Clown Said No (Hardcover)


Coming Soon - Preorder Now
Good things happen when you stand up for yourself!

Petronius is the funniest clown in the world, but he’s tired of being told what to do by the ringmaster. The animals are tired of being bossed around too. So, Petronius and his friends—Theodore the donkey, Ferdinand the horse, Gustav the lion, Luise the giraffe, and Otto the dog—leave the circus. With a little patience and creativity, the friends realize just what it would take to make them happy. They may not have a big top, but Petronius can tell his wonderful stories, the dog can run free without his collar, and the horse can nap through the waltz if he’s getting sleepy. And soon the band of friends perform the show they’ve always dreamed of doing.

This picture book classic from 1961 has been newly illustrated by award winner Torben Kuhlmann for a whole new generation to enjoy.
Torben Kuhlmann studied illustration and communications design at the Hamburg University of Applied Science, with book illustration as his main subject. In June 2012 he finished his studies by writing and illustrating the children’s book Lindbergh—The Tale of a Flying Mouse. This was his first picture book, and within a very short time it became a best seller. It has now been translated into more than thirty languages. Further mouse adventures followed with Armstrong (2016), Edison (2018), and Einstein (2021), all of which have achieved cult status.

Dimitrije Sidjanski (also known as Mischa Damjan) was born in 1914 in Skopje, Macedonia (formerly Yugoslavia). He grew up in Belgrade and studied there before going to Paris to pursue a degree in law. Later he became a lawyer. In 1945 he escaped from captivity in Germany and fled to Switzerland, where he began to write short stories and novels. In 1949 he got to know his future wife, Brigitte Sidjanski, and in 1961 the two of them together founded NordSüd Verlag. In 1979 Dimitrije retired from the company in order to devote himself completely to writing. He died in 1998 at the age of eighty-four.

Award-winning translator Anthea Bell (May 1936-October 2018) was the recipient of the Schlegel Tieck Prize for translation from German, the Independent Foreign Fiction Prize, and the Helen and Kurt Wolff Prize in 2002 for the translation of W. G. Sebald's ""Austerlitz"", and the 2003 Austrian State Prize for Literary Translation. She lived in Cambridge, England.
"Those who turn the pages will find a sweet mix of action and reflection as they cheer on the earnest gaggle of performers. Part storybook, part pep talk to anyone with a dream in reach."
— Kirkus Reviews

*STARRED REVIEW*"Now with stunning new illustrations, this classic picture book centers on a circus clown who’s tired of being “the funniest.” He learns a word that everyone should be brave enough to wield: “no.” ...Everyone realizes that letting living beings speak and live their truths makes for the best spaces possible."
— Foreword Reviews