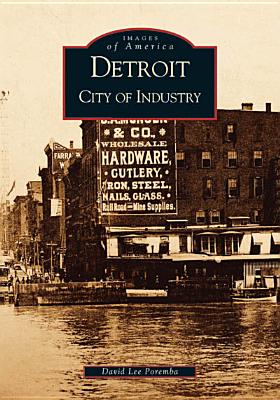 
On Our Shelves Now. Click on title for location specific availability.
Detroit is known worldwide as the automotive capital of the world. What is not widely known is that, prior to the birth of the automobile, a tremendous diversity of manufactured goods transformed Detroit from a frontier town into a great industrial city. Another vital installment in a series of books about the Dynamic City, Detroit: City of Industry illustrates a slice of the city's history that is largely unknown. Through a collection of remarkable images that are among the oldest in the city, Detroit is revealed as a thriving, bustling manufacturing town that served as the world's leader in a number of important industries. Bessemer steel, iron, steel rails, freight cars, stoves, lumber, drugs, and cigars are just a few of the products that helped the city build the capital that was later needed to prosper during the automobile era. This book examines Detroit's development from the 1860s through the 1890s, and its evolution into a leading industrial center of the Midwest.