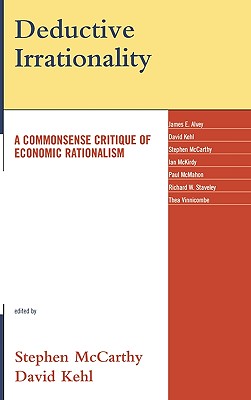 Deductive Irrationality examines and critiques economic rationalism from the perspective of political philosophy. The essays in this collection analyze not only the work of founders of the discipline of economics, but also political philosophers influential in this founding and select contributors of seminal theories in modern economic thought_namely, Thomas Hobbes, John Locke, Adam Smith, Alfred Marshall, John Maynard Keynes, Friedrich Hayek, Gunnar Myrdal, Robert E. Lucas Jr., and John F. Muth. The main theme linking all of the essays together is that economics is a product of modern rationalism and shares with that rationalism the belief that the only real knowledge is scientific knowledge. Derived from a scientific method modeled on mathematics, this method gives both modern political science and modern economics their abstract character. Adam Smith's contribution to Western thought was more than mere economics; his innovations and his variance from previous thinkers follows Machiavelli in finding human nature in the realistic conception of examining men as how they are, rather than the classical view that we should look to the idea of man's formal excellence. To Smith, humanity emerges from a desire for self-preservation, where every worker competes to exchange the fruits of their labor with that of others. The result is a gap between the world of 'common sense' and the world of theory that practitioners in both fields no longer truly understand. By adopting the perspective of political philosophy, the contributors take an approach that is alien to most economists, and in doing so address many of the currents and tensions that underlie modern economic theory and, by implication, the rational choice theory in political science.
Stephen McCarthy is a research fellow for the Griffith Asia Institute at Griffith University in Brisbane, Australia. David Kehl is an economist who has worked for the Australian Departments of the Treasury and of the Prime Minister and Cabinet.