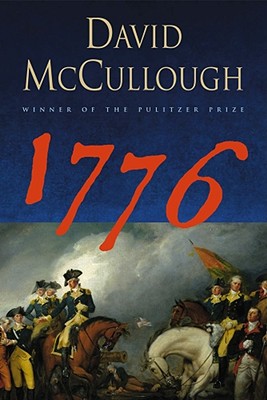 
Not on our shelves. Usually ships in 2-5 days.
America’s beloved and distinguished historian presents, in a book of breathtaking excitement, drama, and narrative force, the stirring story of the year of our nation’s birth, 1776, interweaving, on both sides of the Atlantic, the actions and decisions that led Great Britain to undertake a war against her rebellious colonial subjects and that placed America’s survival in the hands of George Washington.

In this masterful book, David McCullough tells the intensely human story of those who marched with General George Washington in the year of the Declaration of Independence—when the whole American cause was riding on their success, without which all hope for independence would have been dashed and the noble ideals of the Declaration would have amounted to little more than words on paper.

Based on extensive research in both American and British archives, 1776 is a powerful drama written with extraordinary narrative vitality. It is the story of Americans in the ranks, men of every shape, size, and color, farmers, schoolteachers, shoemakers, no-accounts, and mere boys turned soldiers. And it is the story of the King’s men, the British commander, William Howe, and his highly disciplined redcoats who looked on their rebel foes with contempt and fought with a valor too little known.

Written as a companion work to his celebrated biography of John Adams, David McCullough’s 1776 is another landmark in the literature of American history.
David McCullough (1933–2022) twice received the Pulitzer Prize, for Truman and John Adams, and twice received the National Book Award, for The Path Between the Seas and Mornings on Horseback. His other acclaimed books include The Johnstown Flood, The Great Bridge, Brave Companions, 1776, The Greater Journey, The American Spirit, The Wright Brothers, and The Pioneers. He was the recipient of numerous honors and awards, including the Presidential Medal of Freedom, the nation’s highest civilian award. Visit DavidMcCullough.com.
"This is a narrative tour de force, exhibiting all the hallmarks the author is known for: fascinating subject matter, expert research and detailed, graceful prose. ...Simply put, this is history writing at its best from one of its top practitioners."
-- Publishers Weekly, Starred Review

"A master story-teller's character driven account of a storied year in the American Revolution. A sterling account."
-- Kirkus, Starred Review

"...McCullough brilliantly captures the Spirit of '76 in Washington's miraculous victories at Trenton and Princeton. An altogether marvelous contribution that deserves to be read by every American."
-- Library Journal