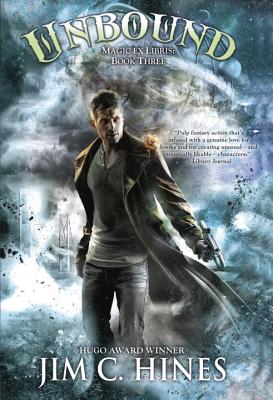 This is book number 3 in the Magic Ex Libris series.

For five hundred years, the Porters have concealed the existence of magic from the world.

Now, old enemies have revealed the Porters’ secrets, and an even greater threat lurks in the shadows. The would-be queen Meridiana, banished for a thousand years, has returned in the body of a girl named Jeneta Aboderin. She seeks an artifact created by Pope Sylvester II, a bronze prison that would grant her the power to command an army of the dead.

Michigan librarian Isaac Vainio is powerless to stop her, having been stripped of his power and his place among the Porters by Johannes Gutenberg himself. But Isaac is determined to regain his magic and to rescue his former student Jeneta. With no magic of his own, Isaac must delve into the darker side of black-market magic, where he will confront beings better left undisturbed, including the sorcerer Juan Ponce de Leon.

With his loyal fire-spider Smudge, dryad warrior Lena Greenwood, and psychiatrist Nidhi Shah, Isaac races to unravel a mystery more than a thousand years old as competing magical powers battle to shape the future of the world. He will be hunted by enemies and former allies alike, and it will take all his knowledge and resourcefulness to survive as magical war threatens to spread across the globe. Isaac’s choices will determine the fate of his friends, the Porters, the students of Bi Sheng, and the world.

Only one thing is certain: even if he finds a way to restore his magic, he can’t save them all….
Jim C. Hines has been a paid juggler, earned a black belt in two different martial arts, performed yo-yo tricks at the top of the Eiffel Tower, and lived with a brain-damaged squirrel. (Only three of those are true.) One of his earliest stories earned first place in the Writers of the Future contest. He’s published more than forty short stories as well as numerous fantasy novels, including the humorous Jig the Dragonslayer trilogy, the Princess series, which re-imagines traditional fairy-tale princesses as butt-kicking action heroines, and the Magic Ex Libris series, about a centuries-old secret society dedicated to the use and control of book magic. In 2012, he won the Hugo for Best Fan Writer. Jim lives in Michigan with his wife, two children, and an unstable number of pets. He can be found online at www.jimchines.com.

"An engaging writer who is also greatly entertaining, and I recommend this book to anyone who enjoys superior worldbuilding." —Charlaine Harris, #1 New York Times bestselling writer

"This may be Jim Hines' best work. Libriomancer is smart, silly, and deadly serious, all at the same time. It's a book about loving books." —Seanan McGuire, New York Times bestselling writer

“Hines created a system where that magic becomes real, usable, and very definitely not always safe. This is a book for everyone who has ever wanted to pull Excalibur from the page.” —Tanya Huff, bestselling author

“A rich backstory and mythology that weaves history and magic and science fiction across centuries, between cultures, and around the globe.” —Wired

"Bibliophiles and fantasy enthusiasts will enjoy the author's intelligent approach to both magic and literature." —Library Journal

"Hines writes joyously.... Codex Born is what would happen if a group of fantasy fans were to hole up in a room trying to develop a system of magic, saying, 'But what if THIS happened?'" —RT Reviews

"Libriomancer is any book-geek's dream come true. It is so much fun and an ode to books." —Book Smugglers

“Isaac’s story feels extremely personal and intimate, even throughout the world-changing events around him.” —SF Signal

"Hines has just scratched the surface of what he can do. And I can't wait to see what comes next." ­­—Tor.com

“Continues to break tropes and proves that fantasy can be so much more.... Right at the top of my list of favorites along with JK Rowling’s Harry Potter, Patrick Rothfuss’ Kingkiller Chronicle, Garth Nix’s Abhorsen, and Kim Harrison’s Hollows.” —Bibliophilic Witch

“Wonderful characterizations. From a fire spider to Gutenberg himself, [Hines] makes all his characters come alive on the page.” —Errand Dreams