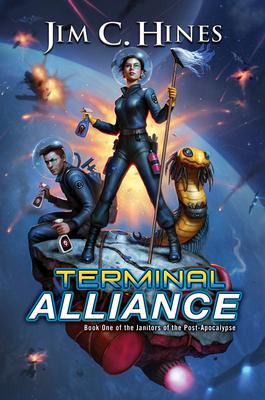 
On Our Shelves Now
In his hilarious new sci-fi series, Jim C. Hines introduces the unlikely heroes that may just save the galaxy: a crew of space janitors.

The Krakau came to Earth to invite humanity into a growing alliance of sentient species. However, they happened to arrive after a mutated plague wiped out half the planet, turned the rest into shambling, near-unstoppable animals, and basically destroyed human civilization. You know—your standard apocalypse.

The Krakau’s first impulse was to turn around and go home. (After all, it’s hard to have diplomatic relations with mindless savages who eat your diplomats.) Their second impulse was to try to fix us. Now, a century later, human beings might not be what they once were, but at least they’re no longer trying to eat everyone. Mostly.

Marion “Mops” Adamopoulos is surprisingly bright (for a human). As a Lieutenant on the Earth Mercenary Corps Ship Pufferfish, she’s in charge of the Shipboard Hygiene and Sanitation team. When a bioweapon attack wipes out the Krakau command crew and reverts the rest of the humans to their feral state, only Mops and her team are left with their minds intact.

Escaping the attacking aliens—not to mention her shambling crewmates—is only the beginning. Sure, Mops and her team of space janitors and plumbers can clean the ship as well as anyone, but flying the damn thing is another matter.

As they struggle to keep the Pufferfish functioning and find a cure for their crew, they stumble onto a conspiracy that could threaten the entire alliance… a conspiracy born from the truth of what happened on Earth all those years ago.

Jim C. Hines has proven himself a master of humorous fantasy with his Jig the Goblin novels, and has turned the usual fantasy tropes sideways and upside down with his Princess and his Magic Ex Libris series. With Terminal Alliance, the debut novel in his humorous military science fiction series, Jim takes us into a brand-new universe of entertainment certain to appeal to fans of both Douglas Adams and Terry Pratchett.
Jim C. Hines is the author of numerous fantasy novels, including the Magic ex Libris series, the Princess series of fairy tale retellings, and the humorous Goblin Quest trilogy. He’s an active blogger, and won the 2012 Hugo Award for Best Fan Writer. He lives in mid-Michigan with his family.
Praise for Terminal Alliance:

"The book is damn hilarious. It's less Tanya Huff and more Phule's Company in the best possible way. It's witty and sharp, it sneaks in some social commentary, and it skates just on the right side of the line between clever absurdity and complete chaos." —Ilona Andrews, #1 New York Times bestselling author

“Jim Hines is one of the funniest, and most fun, writers in our genre! Terminal Alliance skewers science fiction tropes and takes on a wild romp through an original universe.” —Tobias S. Buckell, author of the Xenowealth series

“Terminal Alliance was a really fun read. Mops is a great POV character, and I enjoyed the way that the maintenance crew got to be the heroes—but also they didn't just pick up the controls of the ship and fly around as though it were super easy.” —Ann Leckie, Nebula- and Hugo-winning author of Ancillary Justice

“I enjoyed Terminal Alliance very much. It’s a spunky, irreverent interstellar romp with most unlikely heroes and frequent laugh-out-loud moments. I look forward to more adventures featuring this delightful cast of galactic janitors.” —Marko Kloos, author of the Frontlines series

“Like the slightly demented love child of Douglas Adams and Elizabeth Moon, Terminal Alliance is clever, silly, full of surprises, and unfailingly entertaining. Apparently Jim C. Hines is capable of being funny in every genre.” —Deborah Blake, author of the Baba Yaga series

“Hines (Libromancer) delivers a fantastic space opera that doesn’t skimp on the action and excitement but pairs it with a hefty dose of slightly scatological humor. The author is especially clever in having Mops and her team leverage cleaning tools and a knowledge of spaceship plumbing to fight their enemies.” —Library Journal (starred)

"[Terminal Alliance] is also good science fiction: a solid premise, an expansive universe, a compelling history, a strong and varied cast of characters, pulse-pounding action, and a galactic crisis with high stakes. The fact that it’s funny is icing on a rich and delicious cake. Clever, and should appeal to fans of Douglas Adams and John Scalzi." —Booklist