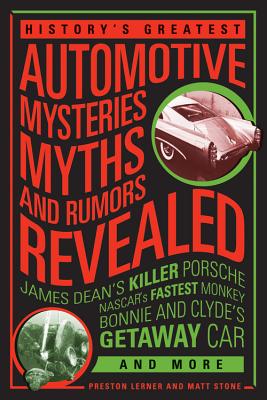 Explore the origins of some of the automotive world’s most intriguing stories, mysteries, myths, rumors, and legends.

Fantastic stories have swirled around the automobile since the first car appeared over 100 years ago. History’s Greatest Automotive Mysteries, Myths, and Rumors Revealedcompiles a juicy selection covering subjects from racing to automakers, crime to pop culture, and historical to modern day. With engaging text from veteran automotive journalists Matt Stone and Preston Lerner accompanied by contemporary and historic photographs of vehicles and their famous drivers, discover the fascinating truth behind a host of mysteries.

Did you know that after James Dean’s death behind the wheel of his Porsche 550 Spyder, parts of the car were sold off, and said parts then cursed their new owners? Or did they?

Did you know Bonnie and Clyde stole Ford V-8s almost exclusively as getaway cars because they were the fastest cars of their day? Or that Clyde Barrow wrote Henry Ford a “thank-you” note for building the cars that made escaping his bank heists so successful?

NASCAR has been the source of countless myths and legends. Did you know, for example, that a monkey by the name of Jocko Flocko once won a Grand National race? (Hall of Fame driver Tim Flock helped.) Or that one of the most famous stock cars in NASCAR lore—a Chevelle built by legendary rules-bender Smokey Yunick—never actually turned a lap on a racetrack?

Did you ever hear the one about the 1964 Impala that flew into a cliff—at 350 miles per hour—in the Arizona desert, thereby winning the inaugural Darwin Award? How about the Ford Pinto that flew like a bird? Or the 68-horsepower Hyundai Excel that maxed out at 115 miles per hour while speeding Rodney King to a rendezvous that would eventually lead to the L.A. Riots?

What was the first car to break the sound barrier? Who won the first Indy 500? What kind of car was dancer Isadora Duncan in when she was killed? What car performed the most spectacular stunt in the James Bond movie oeuvre?

In all of these cases, the answers may not be what you think.

These are just a few of the automotive world’s crazy stories, mysteries, myths, and legends. Read it and be amazed!

Matt Stone (Glendale, CA), former executive editor of Motor Trend magazine, has been a professional automotive journalist and photographer since 1985. He is the author and photographer of several books, including Motorbooks’ best-selling 365 Cars You Must Drive (2006), My First Car (2011), McQueen’s Machines (2010), McQueen’s Motorcycles (2017) and Hot Rod Empire (2018). He is the co-author, with Preston Lerner, of Winning: The Racing Life of Paul Newman (2014) and History’s Greatest Automotive Mysteries, Myths, and Rumors Revealed (2014).


“Authors Matt Stone and Preston Lerner are seasoned automotive writers and the book reads with the insider intrigue of two scribes talking to friends over beers.” - San Diego Union Tribune   “… chock-full of amusing car-related trivia and miscellany – perfect for dipping onto on drowsy, cloudy winter afternoons.” - Detroit News   “The answers are here, one question and answer per chapter. Authors Stone and Lerner, both auto magazine writers, know how to weave a compelling tale. Each chapter's brief length and unconnected nature make this the perfect book to read, put down and come back to. It's a guilty pleasure; one that's hard to put down for good and is certainly my favorite book this year.” - Boston Herald

“Maybe you grew up liking the Ripleys’ Believe it Or Not panels that ran in your local paper’s comic section. If so, the format and content of this interesting exercise in debunking the past may genuinely catch your interest… it’s an entertaining read.” - Hemmings Motor News   “A good deal of the fun here is in following the authors’ steps as they sought to prove or disprove the various tales.” - Auto Restorer   “The topics are interesting; the research is impressive, and the writing is clear and informative.” - RV Life