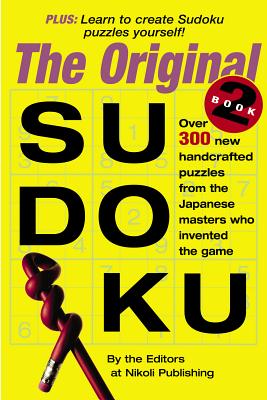 By Editors of Nikoli Publishing


On Our Shelves Now. Click on title for location specific availability.
“The Best Puzzles Are Made by Happy Employees.” So Ad Age describes the credo of Nikoli, the Japanese puzzle company that invented the Sudoku craze and supplies 100% of the puzzles published in Japanese newspapers and magazines. And when they say “made,” they mean literally handmade—unlike the computer-generated puzzles found in other American Sudoku products.

And that’s one of the features that makes THE ORIGINAL SUDOKU BOOK 2— and THE ORIGINAL SUDOKU, published between seasons and already with 115,000 copies in print—unique. The books celebrate the compulsive joy of Sudoku with symmetry, smartness, and elegance. They invite you to match wits with the experts, to step into the 81-cell arena with a puzzle maker who has fiendishly anticipated your next step. Fun without frustration.

Other features? More all-new puzzles—over 300, arranged from “Easy” to “Very Hard.” The same chunky, easy-to-tote format, because once addicted you will be toting it around everywhere. An informative introduction that shows you how to approach and solve the puzzles. Plus an entirely new idea—an unprecedented tutorial on how to create your very own handmade Sudoku puzzles.

The obsession continues.
Nikoli is the Japanese puzzle and game company that’s been nurturing and developing sudoku for over thirty-five years. They hold the trademark on sudoku in Japan, and supply 100 percent of the puzzles published in Japanese newspapers and magazines.