The Next 100 Years: A Forecast for the 21st Century (Paperback) 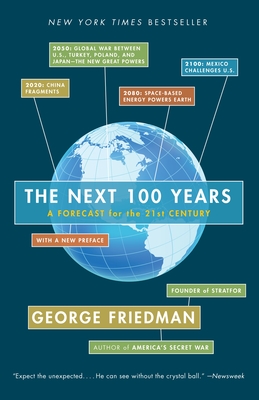 The Next 100 Years: A Forecast for the 21st Century (Paperback)


Special Order - Subject to availability
“Conventional analysis suffers from a profound failure of imagination. It imagines passing clouds to be permanent and is blind to powerful, long-term shifts taking place in full view of the world.” —George Friedman

In his long-awaited and provocative new book, George Friedman turns his eye on the future—offering a lucid, highly readable forecast of the changes we can expect around the world during the twenty-first century. He explains where and why future wars will erupt (and how they will be fought), which nations will gain and lose economic and political power, and how new technologies and cultural trends will alter the way we live in the new century.
The Next 100 Years draws on a fascinating exploration of history and geopolitical patterns dating back hundreds of years. Friedman shows that we are now, for the first time in half a millennium, at the dawn of a new era—with changes in store, including:

• The U.S.-Jihadist war will conclude—replaced by a second full-blown cold war with Russia.
• China will undergo a major extended internal crisis, and Mexico will emerge as an important world power.
• A new global war will unfold toward the middle of the century between the United States and an unexpected coalition from Eastern Europe, Eurasia, and the Far East; but armies will be much smaller and wars will be less deadly.
• Technology will focus on space—both for major military uses and for a dramatic new energy resource that will have radical environmental implications.
• The United States will experience a Golden Age in the second half of the century.

Written with the keen insight and thoughtful analysis that has made George Friedman a renowned expert in geopolitics and forecasting, The Next 100 Years presents a fascinating picture of what lies ahead.

For continual, updated analysis and supplemental material, go to www.geopoliticalfutures.com.

GEORGE FRIEDMAN is founder and chairman of Geopolitical Futures, which specializes in geopolitical forecasting. Prior to 2015, Friedman was chairman of the global intelligence company Stratfor, which he founded in 1996. Friedman is the author of six books, including the New York Times bestsellers The Next 100 Years and The Next Decade. He is a senior advisor to Gallup, Inc.  He lives in Austin, Texas.

“Expect the unexpected. . . . He can see without the crystal ball.”—Newsweek

“Barron’s consistently has found Stratfor’s insights informative and largely on the money—as has the company’s large client base, which ranges from corporations to media outlets and government agencies.”—Barron’s

“There is a temptation, when you are around George Friedman, to treat him like a Magic 8-Ball.”—New York Times Magazine

"Predictions have made George Friedman a hot property these days." —The Wall Street Journal