The Freedom Writers Diary (Movie Tie-in Edition): How a Teacher and 150 Teens Used Writing to Change Themselves and the World Ar (Paperback) 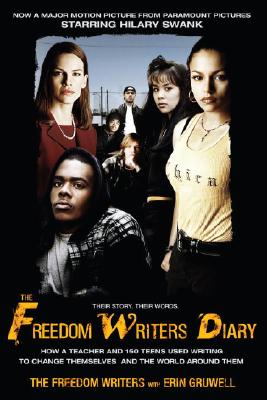 The Freedom Writers Diary (Movie Tie-in Edition): How a Teacher and 150 Teens Used Writing to Change Themselves and the World Ar (Paperback)

Shocked by the teenage violence she witnessed during the Rodney King riots in Los Angeles, Erin Gruwell became a teacher at a high school rampant with hostility and racial intolerance. For many of these students–whose ranks included substance abusers, gang members, the homeless, and victims of abuse–Gruwell was the first person to treat them with dignity, to believe in their potential and help them see it themselves. Soon, their loyalty towards their teacher and burning enthusiasm to help end violence and intolerance became a force of its own. Inspired by reading The Diary of Anne Frank and meeting Zlata Filipovic (the eleven-year old girl who wrote of her life in Sarajevo during the civil war), the students began a joint diary of their inner-city upbringings. Told through anonymous entries to protect their identities and allow for complete candor, The Freedom Writers Diary is filled with astounding vignettes from 150 students who, like civil rights activist Rosa Parks and the Freedom Riders, heard society tell them where to go–and refused to listen.

Proceeds from this book benefit the Freedom Writers Foundation, an organization set up to provide scholarships for underprivieged youth and to train teachers