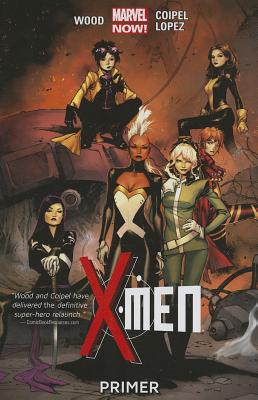 This is book number 1 in the Marvel Now series.

The X-Women finally get their own book, from critically acclaimed superstars Brian Wood (X-MEN, ULTIMATE X-MEN, DMZ, THE MASSIVE) and Oliver Coipel (AVX, HOUSE OF M, THOR) An old enemy shows up at the X-Men's door, seeking asylum from an ancient evil come back to earth. Meanwhile, Jubilee has come home, and she's brought with her an orphaned baby who might hold the key to the earth's survival...or its destruction. Against a backdrop of what seems like an alien invasion and an eons-spanning war between brother and sister, Storm steps up and puts together a team to protect the child and stop a new threat that could destroy all life on earth Collecting X-Men 1-4, Uncanny X-Men 244.
Multiple Eisner Award-nominee Brian Wood released his first series, Channel Zero, to considerable critical acclaim in 1997. He is best known for original series such as DMZ, Northlanders, Demo and Local. In 2011, Wood kicked off the second major phase of his career with the original series The Massive and Anthem, Conan for Dark Horse Comics, and Wolverine and the X-Men: Alpha & Omega for Marvel. Talented French artist Olivier Coipel is one of Marvel's top stars, having caught the eyes of Avengers fans with his work in a series of startlingly fresh and exciting stories in 2004. However, his modest entrance into the comic-art scene couldn't have prepared anyone for what came next: a star turn on the 2005 blockbuster limited series House of M. Proving his mettle with the grand splendor and huge cast of a Marvel epic, he earned the plum assignment of restoring the hallowed halls of Asgard to grandeur in J. Michael Straczynski's Thor. Again called on to illustrate a Marvel mega-event, Coipel reunited with House of M writer Brian Michael Bendis on Siege. He then returned to the world of Marvel's Thunder God, launching The Mighty Thor with writer Matt Fraction.