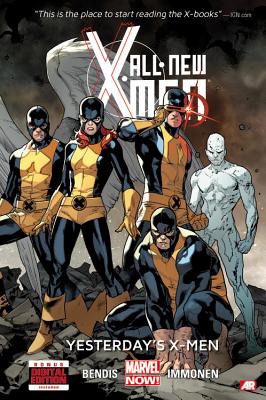 It's a blast from the past as the original five students of Professor X - Cyclops, Marvel Girl, Iceman, Angel and Beast - are plucked from the past and brought to the present. But what they find, the state that their future selves are in and the state of Xavier's dream, is far from the future they dreamed of. And how will the X-Men of the present deal with their past coming crashing forward?ALL-NEW X-MEN VOL. 1: YESTERDAY'S X-MEN includes a code for a free digital copy on the Marvel Comics app (for iPhone®, iPad®, iPad Touch® & Android devices) and Marvel Digital Comics Shop. Additionally, this collection also features special augmented reality content available exclusive through the Marvel AR app - including cover recaps, behind the scenes features and more that add value to your reading experience at no additional cost.
COLLECTING: All-New X-Men 1-5

Brian Michael Bendis is an award winning comics creator and one of the most successful writers working in mainstream comics. For the last eleven years, Brian's books have consistently sat on the top of the nationwide comic and graphic novel sales charts. Brian's other projects include the Eisner award winning "POWERS" (w/Mike Oeming) from Marvel's creator owned imprint ICON, and the Hollywood tell all "FORTUNE AND GLORY'. Entertainment Weekly gave both projects an "A." SONY and FX networks are currently developing POWERS for series with Brian as exec producer.

Stuart Immonen is a Canadian comic book artist. He is best known for his work on Nextwave, Ultimate X-Men, The New Avengers, and Ultimate Spider-Man. His pencils are usually inked by Wade Von Grawbadger