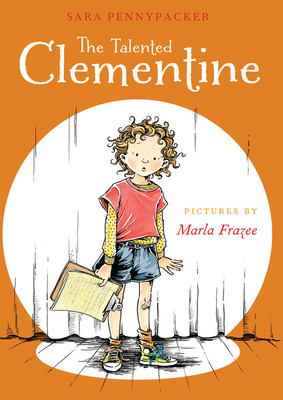 This is book number 2 in the Clementine series.

When it comes to tackling third grade, Clementine is at the top of her game-okay, so maybe not all the time. After her teacher announces that the third and fourth graders will be putting on a talent show, Clementine panics. She doesn't sing or dance or play an instrument. She can't even hop with finesse. And as if that didn't make her feel bad enough, her perfect best friend, Margaret, has so many talents, she has to alphabetize them to keep them straight? How can Clementine ever hope to compete?

As the night of the big "Talent-palooza" draws closer, Clementine is desperate for an act, any act. But the unexpected talent she demonstrates at the show surprises everyone-most of all herself.
Sara Pennypacker splits her time between Florida and Massachusetts, were she feels lucky to be able to write every day. She is the author of many children's books, including Waylon! One Awesome Thing and Waylon! Even More Awesome, the New York Times #1 bestseller Pax; seven in the New York Times bestselling Clementine series; two in the Stuart series; Meet the Dullards; Summer of the Gypsy Moths; and Sparrow Girl. Her books have won numerous accolades, including a Golden Kite Award, a Christopher Award, and several children's choice state awards, and they have appeared on many Best Books of the Year lists. For more information, visit www.sarapennypacker.com.