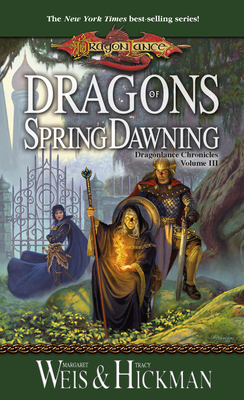 
On Our Shelves Now. Click on title for location specific availability.
Will truth and virtue triumph over the deadly darkness of an all-consuming evil?

The war against the dragon minions of Queen Takhisis rages on. Armed with the mysterious, magical Dragon Orbs and the shining, silver Dragonlance, the Companions of the Lance lead their people in a desperate final battle. Knight and barbarian, warrior and mage, dwarf and kender—no one has reckoned how high the price of defeat, or even victory, might be.

But now, in the dawn of a new day, the dark secrets that have long shadowed the hearts of the Companions come to light. If they are to truly defeat the five-headed dragon goddess, they must find a way to overcome their own personal conflicts and doubts. From betrayal and treachery to fragility and weakness, the greatest battle now lies within each of them.

Dragons of Spring Dawning is the third book in the Dragonlance Chronicles.
Margaret Weis and Tracy Hickman published their first novel in the Dragonlance Chronicles, Dragons of Autumn Twilight, in 1984. Over twenty years later, they are going strong as partners and have published over a hundred books, including over thirty novels, collections of short stories, role-playing games, and other game products alone or with other co-authors. Hickman is also the inspiration for the "Tracy Hickman Presents" line of Dragonlance novels for Wizards of the Coast. Weis is the President of Sovereign Press, which publishes Dragonlance game material as well as many other game products.