Human, All Too Human I: Volume 3 (Complete Works of Friedrich Nietzsche #3) (Hardcover) 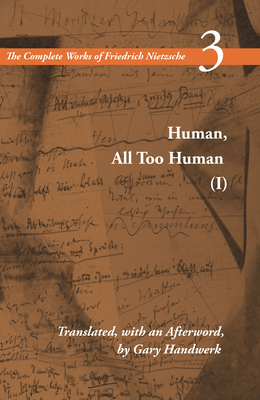 Human, All Too Human I: Volume 3 (Complete Works of Friedrich Nietzsche #3) (Hardcover)

This is book number 3 in the Complete Works of Friedrich Nietzsche series.

This is the second volume to appear in an edition that will be the first complete, critical, and annotated English translation of all of Nietzsche's work. Volume 2: Unfashionable Observations, translated by Richard T. Gray, was published in 1995. The edition is a new English translation, by various hands, of the celebrated Colli-Montinari edition, which has been acclaimed as one of the most important works of scholarship in the humanities in the last quarter century. The original Italian edition was simultaneously published in French, German, and Japanese.

This volume of Human, All Too Human, the first of two parts, is the earliest of Nietzsche's works in which his philosophical concerns and methodologies can be glimpsed. In this work Nietzsche began to establish the intellectual difference from his own cultural milieu and time that makes him our contemporary. Published in 1878, it marks both a stylistic and an intellectual shift away from Nietzsche's own youthful affiliation with Romantic excesses of German thought and culture typified by Wagnerian opera.

"The Colli-Montinari edition has revolutionized our understanding of one of the greatest German thinkers. As a result of the new view opened up by this edition, Nietzsche has clearly come into his own as one of the more important philosophers of modern times. The English-language edition should become a classic that will be used by generations of scholars."—David E. Wellbery, The Johns Hopkins University

"The Colli-Montinari critical edition of Nietzsche's works is one of the most important works of scholarship in the humanities in the last quarter century. It was not until after World War II that one began to realize the extent to which Nietzsche's notebooks had been tampered with, jumbled, badly deciphered, and poorly edited, and it was not until the Colli-Montinari edition that scholars could be confident for the first time of having a trustworthy text."—Van A. Harvey, Stanford University