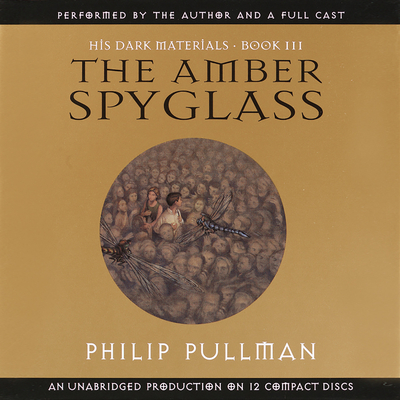 This is book number 3 in the His Dark Materials series.

The Amber Spyglass brings the intrigue of The Golden Compass and The Subtle Knife to a heart-stopping end, marking the final volume of His Dark Materials as the most powerful of the trilogy.

Along with the return of Lyra and other familiar characters from the first two books come a host of new characters: the Mulefa, mysterious wheeled creatures with the power to see Dust; Gallivespian Lord Roke, a hand-high spymaster to Lord Asriel; and Metatron, a fierce and mighty angel. So too come startling revelations: the painful price Lyra must pay to walk through the land of the dead, the haunting power of Dr. Malone's amber spyglass, and the names of who will live - and who will die - for love. And all the while, war rages with the Kingdom of Heaven, a brutal battle that - in its shocking outcome - will uncover the secret of Dust.

Philip Pullman deftly brings the cliffhangers and mysteries of His Dark Materials to an earth-shattering conclusion and confirms his fantasy trilogy as an undoubted and enduring classic.
PHILIP PULLMAN is one of the most acclaimed writers working today. He is best known for the His Dark Materials trilogy, which has been named one of the top 100 books of all time by Newsweek and one of the all-time greatest novels by Entertainment Weekly. Pullman was knighted for his services to literature in the 2019 New Year Honours.

“A literary masterpiece . . . [that] caps the most magnificent fantasy series since The Lord of the Rings and puts Harry Potter to shame. . . . A page-turning story that builds to a powerful finish.”—Oregonian

“Impossible to put down, so firmly and relentlessly does Pullman draw you into his tale. . . . [A] gripping saga pitting the magnetic young Lyra Belacqua and her friend Will Parry against the forces of both Heaven and Hell.”—Pittsburgh Post-Gazette