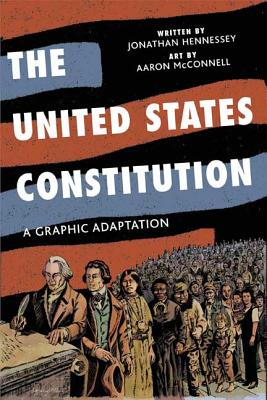 Our leaders swear to uphold it, our military to defend it. It is the blueprint for the shape and function of government itself and what defines Americans as Americans. But how many of us truly know our Constitution?

The United States Constitution: A Graphic Adaptation uses the art of illustrated storytelling to breathe life into our nation's cornerstone principles. Simply put, it is the most enjoyable and groundbreaking way to read the governing document of the United States. Spirited and visually witty, it roves article by article, amendment by amendment, to get at the meaning, background, and enduring relevance of the law of the land.

What revolutionary ideas made the Constitution's authors dare to cast off centuries of rule by kings and queens? Why do we have an electoral college rather than a popular vote for president and vice president? How did a document that once sanctioned slavery, denied voting rights to women, and turned a blind eye to state governments running roughshod over the liberties of minorities transform into a bulwark of protection for all?

The United States Constitution answers all of these questions. Sure to surprise, challenge, and provoke, it is hands down the most memorable introduction to America's founding document.

JONATHAN HENNESSEY is a writer living in Los Angeles. A ten-year veteran of the film and television production industry, Hennessey also works as a story analyst for Phoenix Pictures. He is the author of The United States Constitution: A Graphic Adaptation.

AARON MCCONNELL is a freelance illustrator living in Oregon.

“Intelligently written, lushly illustrated . . . Hennessey interweaves the Framers' intent with contemporary battles over constitutional law, while McConnell colors history with masterful strokes. A civics lesson no one should miss.” —Alexander Nazaryan, The Village Voice (A Best Book of 2008)

“Avoiding the didactic, the book succeeds in being both consistently entertaining and illuminating . . . A fine introduction to U.S. legal history.” —Publishers Weekly

“[A] must-read graphic novel treatment of the history, meaning and evolution of the United States Constitution. It should be a staple of every high school history class.” —Jonathan Valania, Phawker

“A sweet, quick, thoroughgoing history of the U.S. Constitution . . . You'd be hard-pressed to find a better primer for bringing the kids, foreigners and forgetful in your life up to speed.” —Cory Doctorow, Boing Boing

“Before Obama is sworn in as the next U.S. president in January, let Hennessey and McConnell's The United States Constitution: A Graphic Adaptation be your refresher course.” —Charles Moss, PopMatters

“Aaron McConnell's illustrations are brilliant in their effectiveness of depicting complex themes and ideas in discernable ways. The style is reminiscent of the political cartoons of yore and his use of iconography is clever and informative.” —Chris Wilson, The Graphic Classroom