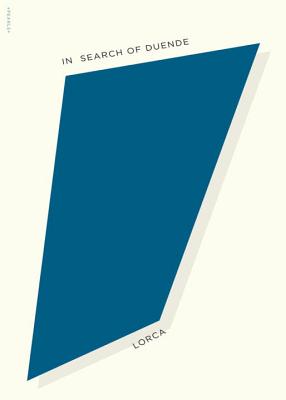 An excellent compilation of Lorca’s poetry and prose, emphasizing Lorca’s notion of the duende, the “earth spirit of irrationality and death.”

The notion of “duende”—a demonic earth spirit embodying irrationality, earthiness, and a heightened awareness of death—became a cornerstone of Lorca’s poetics. In Search of Duende gathers Lorca’s writings about the duende and three art forms susceptible to it: dance, music, and the bullfight. A bilingual sampling of Lorca’s poetry is also included, making this an excellent introduction to Lorca’s poetry and prose for American readers.

Federico García Lorca (1898-1937) was born in Granada, Spain. A poet and playwright (Blood Wedding, The House of Bernarda Alba), he was killed by the Falangists in Spain during the Spanish Civil War.
Spain’s great poet and playwright is being rediscovered.
— The New York Times

One of the greatest poets Spain has ever produced.
— Times Literary Supplement