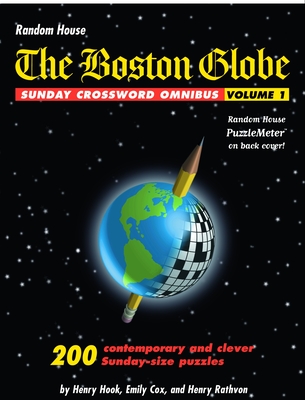 
On Our Shelves Now. Click on title for location specific availability.
After ten exciting volumes of The Boston Globe Sunday Crossword Puzzles, the first omnibus collection has arrived. Fans of this popular series will be delighted that, for the first time, they can get 200 puzzles in one book.

Called "one of America's best" by Games magazine, the Boston Globe series features witty puzzles, up-to-the-minute clues, plenty of wordplay, and a bit of a challenge. As in The Boston Globe itself, crosswords by Henry Hook alternate with crosswords by Emily Cox and Henry Rathvon, three of the brightest stars of the puzzle world.
Henry Hook is the author of Henry Hook's Guess the Celebrity Crosswords and Henry Hook Trivia Crostics. He contributes all sorts of puzzles to a wide variety of publications.

Emily Cox and Henry Rathvon are the authors of The Random House Guide to Cryptic Crosswords. They host an online puzzle forum for The New York Times.