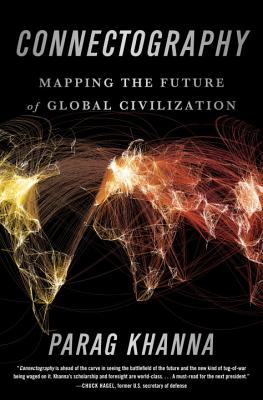 
Email or call for price
From the visionary bestselling author of The Second World and How to Run the World comes a bracing and authoritative guide to a future shaped less by national borders than by global supply chains, a world in which the most connected powers—and people—will win.

Connectivity is the most revolutionary force of the twenty-first century. Mankind is reengineering the planet, investing up to ten trillion dollars per year in transportation, energy, and communications infrastructure linking the world’s burgeoning megacities together. This has profound consequences for geopolitics, economics, demographics, the environment, and social identity. Connectivity, not geography, is our destiny.

In Connectography, visionary strategist Parag Khanna travels from Ukraine to Iran, Mongolia to North Korea, Pakistan to Nigeria, and across the Arctic Circle and the South China Sea to explain the rapid and unprecedented changes affecting every part of the planet. He shows how militaries are deployed to protect supply chains as much as borders, and how nations are less at war over territory than engaged in tugs-of-war over pipelines, railways, shipping lanes, and Internet cables. The new arms race is to connect to the most markets—a race China is now winning, having launched a wave of infrastructure investments to unite Eurasia around its new Silk Roads. The United States can only regain ground by fusing with its neighbors into a super-continental North American Union of shared resources and prosperity.

Connectography offers a unique and hopeful vision for the future. Khanna argues that new energy discoveries and technologies have eliminated the need for resource wars; ambitious transport corridors and power grids are unscrambling Africa’s fraught colonial borders; even the Arab world is evolving a more peaceful map as it builds resource and trade routes across its war-torn landscape. At the same time, thriving hubs such as Singapore and Dubai are injecting dynamism into young and heavily populated regions, cyber-communities empower commerce across vast distances, and the world’s ballooning financial assets are being wisely invested into building an inclusive global society. Beneath the chaos of a world that appears to be falling apart is a new foundation of connectivity pulling it together.

“Incredible . . . With the world rapidly changing and urbanizing, [Khanna’s] proposals might be the best way to confront a radically different future.”—The Washington Post

“Clear and coherent . . . a well-researched account of how companies are weaving ever more complicated supply chains that pull the world together even as they squeeze out inefficiencies. . . . [He] has succeeded in demonstrating that the forces of globalization are winning.”—Adrian Woolridge, The Wall Street Journal

“Bold . . . With an eye for vivid details, Khanna has . . . produced an engaging geopolitical travelogue.”—Foreign Affairs

“For those who fear that the world is becoming too inward-looking, Connectography is a refreshing, optimistic vision.”—The Economist

“Connectivity has become a basic human right, and gives everyone on the planet the opportunity to provide for their family and contribute to our shared future. Connectography charts the future of this connected world.”—Marc Andreessen, general partner, Andreessen Horowitz

“Khanna’s scholarship and foresight are world-class. A must-read for the next president.”—Chuck Hagel, former U.S. secretary of defense
Parag Khanna is a global strategist, world traveler, and bestselling author. He is a CNN Global Contributor and a Senior Research Fellow at the Lee Kuan Yew School of Public Policy at the National University of Singapore. Khanna is the co-author of Hybrid Reality: Thriving in the Emerging Human-Technology Civilization and author of How to Run the World: Charting a Course to the Next Renaissance and The Second World: Empires and Influence in the New Global Order. He has been a fellow at the New America Foundation and Brookings Institution, advised the U.S. National Intelligence Council, and worked in Iraq and Afghanistan as a senior geopolitical adviser to U.S. Special Operations Forces. He holds undergraduate and graduate degrees from the School of Foreign Service at Georgetown University and a Ph.D. from the London School of Economics. He serves on numerous governmental and corporate advisory boards and is a councilor of the American Geographical Society, a trustee of the New Cities Foundation, and a Young Global Leader of the World Economic Forum.
“Incredible . . . We don’t often question the typical world map that hangs on the walls of classrooms—a patchwork of yellow, pink and green that separates the world into more than two hundred nations. But Parag Khanna, a global strategist, says that this map is, essentially, obsolete. . . . With the world rapidly changing and urbanizing, [Khanna’s] proposals might be the best way to confront a radically different future.”—The Washington Post

“Clear and coherent . . . Khanna provides a rare account of the physical infrastructure of globalization. . . . Khanna also provides a well-researched account of how companies are weaving ever more complicated supply chains that pull the world together even as they squeeze out inefficiencies. . . . [He] has succeeded in demonstrating that the forces of globalization are winning the battle for connected space, building tunnels, bridges and pipelines at an astonishing pace.”—Adrian Woolridge, The Wall Street Journal

“Bold . . . With an eye for vivid details, Khanna has nevertheless produced an engaging geopolitical travelogue, unearthing the Internet cables, energy pipelines, and electrical grids that link regions together more closely than ever before and allow people to lead increasingly connected lives. In his view, connectivity is transforming conflict between states into competition for access to the world’s infrastructure of networks and markets.”—Foreign Affairs

“For those who fear that the world is becoming too inward-looking, Connectography is a refreshing, optimistic vision. . . . The most convincing point in the book concerns policy prescriptions. To become part of global supply chains, Mr. Khanna argues, it is essential to invest in infrastructure. China, in particular, has built a sprawling network of ports, canals and the like across the world to acquire and transport natural resources. By contrast, rich countries, especially America, now underfund capital goods, in an attempt to reduce public spending. This short-term skimping bodes ill for future growth.”—The Economist

“We desperately need enlightenment. For this reason alone, books such as Connectography should be welcomed.”—John Kornblum, Carnegie Europe

“Connectivity has become a basic human right, and gives everyone on the planet the opportunity to provide for their family and contribute to our shared future. Connectography charts the future of this connected world.”—Marc Andreessen, general partner, Andreessen Horowitz

“Connectography is ahead of the curve in seeing the battlefield of the future and the new kind of tug-of-war being waged on it. Parag Khanna’s scholarship and foresight are world-class. A must-read for the next president.”—Chuck Hagel, former U.S. secretary of defense

“Khanna’s answer to what geography will mean in the twenty-first century is the most compelling I have seen. . . . The world is changing, and Khanna is surely right not only that supply chains and cyberspace are taking on lives of their own but also that in the best of all possible worlds, inclusive functional geography will replace exclusive political geography, and the state and war will wither away. . . . I think Khanna is right that this is where the post-1989 trends seem to be taking us. . . . Connectography is one of the most stimulating and enjoyable books on the ongoing transformation of geography that anyone could ask for.”—Ian Morris, Stratfor

“Khanna’s content in genuinely innovative. He connects old dots in new ways, quite literally. He asks us to remap the world in terms of its connections rather than its borders. Connective infrastructure trumps separatist nationalism. The economics of supply lines moves into the foreground as politics and ideology fade into the background. . . . He is such a good writer—a master of the ringing cadence. . . . [Connectography includes] dozens of stunning maps.”—Jay Ogilvy, Stratfor

“To get where you want to go, it helps to have a good map. In Connectography, Parag Khanna surveys the economic, political, and technological landscape and lays out the case for why ‘competitive connectivity’—with cities and supply chains as the vital nodes—is the true arms race of the twenty-first century. This bold reframing is an exciting addition to our ongoing debate about geopolitics and the future of globalization.”—Dominic Barton, global managing director, McKinsey & Company

“This is probably the most global book ever written. It is intensely specific while remaining broad and wide. Its takeaway is that infrastructure is destiny: Follow the supply lines outlined in this book to see where the future flows.”—Kevin Kelly, co-founder, Wired

“Parag Khanna takes our knowledge of connectivity into virgin territory, providing an entire atlas on how old and new connections are reshaping our physical, social, and mental worlds. This is a deep and highly informative reflection on the meaning of a rapidly developing borderless world. Connectography proves why the past is no longer prologue to the future. There’s no better guide than Parag Khanna to show us all the possibilities of this new hyperconnected world.”—Mathew Burrows, director, Strategic Foresight Initiative at the Atlantic Council, and former counselor, U.S. National Intelligence Council

“Reading Connectography is a real adventure. The expert knowledge of Parag Khanna has produced a comprehensive and fascinating book anchored in geography but extending to every field that connects people around the globe. His deep analysis of communications, logistics, and many other globally critical areas is remarkable. The book is full of fascinating insights that we normally would not notice, and his writing reflects his extensive travel experience. His recommended sites and tools for mapping are the most comprehensive that I’ve ever seen. This book is an invaluable resource for anyone involved in business, science, arts, or any other field.”—Mark Mobius, executive chairman, Templeton Emerging Markets Group

“Connectography gives the reader an amazing new perspective on human society, bypassing the timeworn categories and frameworks we usually use. It shows us a view of our world as a living thing that really exists: the flows of people, ideas, and materials that constitute our constantly evolving reality. Connectography is a must-read for anyone who wants to understand the future of humanity.”—Sandy Pentland, professor, MIT Media Lab

“Khanna’s new book is a brilliant exploration of supply-chain geopolitics and how the intersection of technology with geography is reshaping the global political economy. It is an intellectual tour de force that sparkles with original insights, stimulating assertions, little-known facts, and well-researched predictions. Highly rewarding reading for anyone seeking to understand the contemporary world order and why China’s ‘one belt, one road’ project is a winning strategy that outflanks the United States’ ‘rebalance to Asia’ by integrating all of Eurasia’s economies under Chinese auspices.”—Chas W. Freeman, Jr., chairman, U.S. China Policy Foundation, and former U.S. ambassador to Saudi Arabia

“Khanna imagines a near-future in which infrastructural and economic connections supersede traditional geopolitical coordinates as the primary means of navigating our world. He makes a persuasive case: Connectography is as compelling and richly expressive as the ancient maps from which it draws its inspiration.”—Sir Martin Sorrell, founder and CEO, WPP

“From Lagos, Mumbai, Dubai, and Singapore to the Amazon, the Himalayas, the Arctic, and the Gobi desert steppe, Parag Khanna’s latest book provides an invaluable guide to the volatile, confusing worlds of early twenty-first-century geopolitics. A provocative remapping of contemporary capitalism based on planetary mega-infrastructures, intercontinental corridors of connectivity, and transnational supply chains rather than traditional political borders.”—Neil Brenner, director, Urban Theory Lab, Harvard University Graduate School of Design

“In high style, Parag Khanna reimagines the world through the lens of globally connected supply-chain networks. It is a world still fraught with perils—old and new—but one ever more likely to nurture peace and sustain progress.”—Professor John Arquilla, United States Naval Postgraduate School

“Today’s world has multiple geographies that do not fit the old geopolitics of states. In Connectography, Parag Khanna gives us not only new techniques for mapping but a whole new map—different, useful, and mesmerizing.”—Saskia Sassen, Robert S. Lynd Professor of Sociology, Columbia University