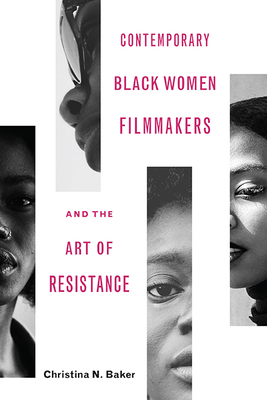 
Not on our shelves. Usually ships in 2-5 days.
(This book is nonreturnable. Nonreturnable books may take up to 3 weeks to ship. All sales final.)
Christina N. Baker’s Contemporary Black Women Filmmakers and the Art of Resistance is the first book-length analysis of representations of Black femaleness in the feature films of Black women filmmakers. These filmmakers resist dominant ideologies about Black womanhood, deliberately and creatively reconstructing meanings of Blackness that draw from their personal experiences and create new symbolic meaning of Black femaleness within mainstream culture. Addressing social issues such as the exploitation of Black women in the entertainment industry, the impact of mass incarceration on Black women, political activism, and violence, these films also engage with personal issues as complex as love, motherhood, and sexual identity. Baker argues that their counter-hegemonic representations have the potential to transform the narratives surrounding Black femaleness. At the intersection of Black feminism and womanism, Baker develops a “womanist artistic standpoint” theory, drawing from the work of Alice Walker, Patricia Hill Collins, bell hooks, Audre Lorde, and Kimberlé Crenshaw.
Analyzing the cultural texts of filmmakers such as Ava DuVernay, Tanya Hamilton, Kasi Lemmons, Gina Prince-Bythewood, and Dee Rees—and including interviews she conducted with three of the filmmakers—Baker emphasizes the importance of applying an intersectional perspective that centers on the shared experiences of Black women and the role of film as a form of artistic expression and a tool of social resistance.

Christina N. Baker is Associate Professor of American Multicultural Studies at Sonoma State University.
“This is a nuanced and brilliant study that will promote discussion of the films and the significance of Black women directors in mainstream popular culture. This book-length study is desperately needed and long overdue.” —Gwendolyn Audrey Foster, author of Women Filmmakers of the African and Asian Diaspora and Willa Cather Professor of Film at the University of Nebraska, Lincoln


“Contemporary Black Women Filmmakers and the Art of Resistance is an important and much-needed work that fills the void which currently exists in the literature on contemporary Black women filmmakers and black women’s narratives. The value of this book cannot be underestimated.” —Charlene Regester, author of African American Actresses: The Struggle for Visibility, 1900–1960