Ghost Writers: Us Haunting Them, Contemporary Michigan Literature (Made in Michigan Writers) (Paperback) 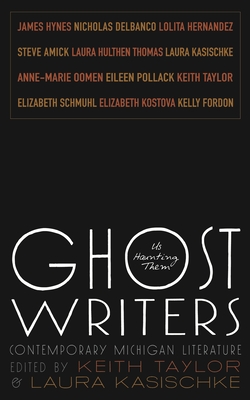 Ghost Writers: Us Haunting Them, Contemporary Michigan Literature (Made in Michigan Writers) (Paperback)

For Ghost Writers: Us Haunting Them editors Keith Taylor and Laura Kasischke asked twelve celebrated Michigan writers to submit new stories on one subject: ghosts. The resulting collection is a satisfying mix of tales by some of the state's most well-known and award-winning writers. Some of the pieces are true stories written by non-believers, while others are clearly fiction and can be funny, bittersweet, spooky, or sinister. All share Michigan as a setting, bringing history and a sense of place to the eerie collection.

Ghosts in these stories have a wide range of motivations and cause a variety of consequences. In some cases, they seem to dwell in one person's consciousness, as in Steve Amick's Not Even Lions and Tigers, and other times they demonstrate their presence with tangible evidence, as in Laura Hulthen Thomas's Bones on Bois Blanc. Spirits sometimes appear in order to communicate something important to the living, as in James Hynes's Backseat Driver and Lolita Hernandez's Making Bakes, to change the course of events, as in Anne-Marie Oomen's Bitchathane, or to cause characters to look inside themselves, as in Elizabeth Schmuhl's Belief. The supernatural stories in Ghost Writers visit a mix of Michigan locations, from the urban, to the suburban, and rural. Authors find ghosts in family farmhouses, downtown Detroit streets, an abandoned northern Michigan lighthouse, gracious Grosse Pointe homes, a mid-Michigan apartment complex, and the crypt of a Polish priest in the small town of Cross Village. Taylor and Kasischke have assembled a collection with a diverse mixture of settings, tones, and styles, ensuring that Ghost Writers will appeal to all readers of fiction, particularly those interested in the newest offerings from Michigan's best fiction writers.
Keith Taylor has published ten books of poetry, short fiction, translations, and edited volumes, including If the World Becomes So Bright (Wayne State University Press, 2009). His most recent book is the chapbook of poems Marginalia for a Natural History. Over the years his poems, stories, essays and book reviews have appeared in the Chicago Tribune, the Southern Review, the Detroit Free Press, and Michigan Quarterly Review, among many others. He has received grants or fellowships from the National Endowment for the Arts, and the Michigan Council for the Arts and Cultural Affairs. He teaches English at the University of Michigan and directs the Bear River Writers' Conference. Laura Kasischke has published seven novels, including Eden Springs (Wayne State University Press, 2010), and seven collections of poetry. Her work has been translated widely, and two of her novels have been made into feature-length films. She has been the recipient of a Guggenheim Fellowship and two grants from the National Endowment for the Arts. She teaches in the MFA program and the Residential College at the University of Michigan.