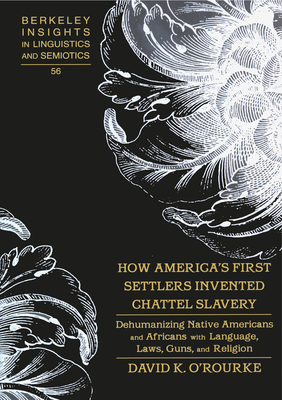 This is book number 56 in the Berkeley Insights in Linguistics and Semiotics series.

From New England and Virginia to New Spain and the current Southwest, North America's founding householders - English and Spanish alike - took the limited European practice of coerced labor and, over the course of two hundred years, transformed it into a depersonalized and brutal chattel slavery unlike anything that had existed in Europe. What system of language and logic, what visions of religious and civil society, allowed men who saw themselves both as Christians and cultured humanists to dehumanize and enslave people whose cultures and accomplishments were evident to nearly all? In this book we observe the progressive development of a mindset that allowed the settlers to see both Native Americans and Africans as others who did not merit human status.
The Author: Theologian, editor, and essayist David K. O'Rourke writes extensively in the area of cultural history with an emphasis on religion. Among his books are Demons by Definition: Social Idealism, Religious Nationalism, and the Demonizing of Dissent (Peter Lang, 1998); A Process of Conversion (1985); and The Holy Land as Jesus Knew It (1983). In addition to his AB from Yale, David O'Rourke has received the theological degrees S.T.Lic. and S.T.Lr. He is Senior Fellow at the Santa Fe Institute in Berkeley, California.