Whose Middle Ages?: Teachable Moments for an Ill-Used Past (Paperback) 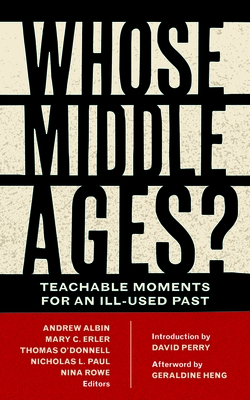 Whose Middle Ages?: Teachable Moments for an Ill-Used Past (Paperback)

Whose Middle Ages? is an interdisciplinary collection of short, accessible essays intended for the nonspecialist reader and ideal for teaching at an undergraduate level. Each of twenty-two essays takes up an area where digging for meaning in the medieval past has brought something distorted back into the present: in our popular entertainment; in our news, our politics, and our propaganda; and in subtler ways that inform how we think about our histories, our countries, and ourselves. Each author looks to a history that has refused to remain past and uses the tools of the academy to read and re-read familiar stories, objects, symbols, and myths.

Whose Middle Ages? gives nonspecialists access to the richness of our historical knowledge while debunking damaging misconceptions about the medieval past. Myths about the medieval period are especially beloved among the globally resurgent far right, from crusading emblems on the shields borne by alt-right demonstrators to the on-screen image of a purely white European populace defended from actors of color by Internet trolls. This collection attacks these myths directly by insisting that readers encounter the relics of the Middle Ages on their own terms. Each essay uses its author's academic research as a point of entry and takes care to explain how the author knows what she or he knows and what kinds of tools, bodies of evidence, and theoretical lenses allow scholars to write with certainty about elements of the past to a level of detail that might seem unattainable. By demystifying the methods of scholarly inquiry, Whose Middle Ages? serves as an antidote not only to the far right's errors of fact and interpretation but also to its assault on scholarship and expertise as valid means for the acquisition of knowledge.
Geraldine Heng (Afterword By) Geraldine Heng is Perceval Professor in English and Comparative Literature, Middle Eastern Studies and Women's Studies, at the University of Texas in Austin. The author of Empire of Magic: Medieval Romance and the Politics of Cultural Fantasy (Columbia, 2003, 2004, 2012), The Invention of Race in the European Middle Ages (Cambridge, 2018), and England and the Jews: How Religion and Violence Created the First Racial State in the West (Cambridge, 2018). She is also the founder and director of the Global Middle Ages Project (www.globalmiddleages.org). She is currently researching and writing Early Globalisms: The Interconnected World, 500- 1500 CE. Andrew Albin (Edited By) Andrew Albin is Assistant Professor of English and Medieval Studies at Fordham University and a member of the faculty of Fordham University's Center for Medieval Studies. Mary C. Erler (Edited By) Mary C. Erler is Distinguished Professor of English at Fordham University and a member of the faculty of Fordham University's Center for Medieval Studies. Thomas O'Donnell (Edited By) Thomas O'Donnell is Co-Chair, Comparative Literature, Associate Professor of English and Medieval Studies, and a member of the faculty of Fordham University's Center for Medieval Studies. Nicholas L. Paul (Edited By) Nicholas L. Paul is Associate Professor of History at Fordham University. He received his MPhil in Medieval History and PhD in History from Cambridge University. His previous publications include To Follow in Their Footsteps: The Crusades and Family Memory in the High Middle Ages (Cornell, 2017) and the coedited collections Remembering the Crusades: Myth, Image, and Identity (Johns Hopkins, 2012), and, with Laura K. Morreale, The French of Outremer: Communities and Communications in the Crusading Mediterranean (Fordham, 2018). Nina Rowe (Edited By) Nina Rowe is Associate Professor of Art History and a member of the faculty of Fordham University's Center for Medieval Studies. David Perry (Introducer) David Perry--Professor of Medieval History at Dominican University from 2006 to 2017--is a columnist for Pacific Standard Magazine and a freelance journalist covering politics, history, education, and disability rights. His scholarly work focuses on Venice, the Crusades, and the Mediterranean world. He is the author of Sacred Plunder: Venice and the Aftermath of the Fourth Crusade (Penn State, 2015).