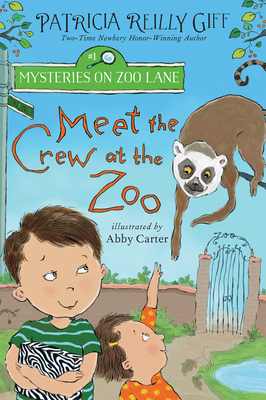 This is book number 1 in the Mysteries on Zoo Lane series.

Solve mysteries at the city zoo with a diverse group of kids in this illustrated chapter book from a two-time Newbery Honor author.

Lions and tigers for neighbors? That doesn't bother Luke at all. It's making new friends that scares him. Not only has Luke had to move from Florida to New York because of his dad's new job as a zoo doctor, but he's also had to leave behind his best friend--his abuelo.

When Luke discovers that there are other kids also living on Zoo Lane and that one of them might be the owner of a mysterious zebra-printed box left outside his house, he wonders if just maybe he can make friends and solve a mystery in this wild new place.

In this first book of the series, two-time Newbery Honor author Patricia Reilly Giff has crafted a charming story about conservation, animal care, friendship, and problem-solving. In touch with the programs and initiatives that today's zoos are undertaking, Giff provides readers with a fresh look at the work of zoologists. Charming line artwork by Abby Carter appears throughout and keeps the story upbeat.
Patricia Reilly Giff is the winner of two Newbery Honor Awards, for Lily's Crossing and Pictures of Hollis Woods. Some of her other middle grade novels include Genevieve's War, winner of the Christopher Award; Nory Ryan's Song, an ALA Notable Book; and A Slip of a Girl, which received two starred reviews. Her Kids of the Polk Street School series remain a popular chapter book mainstay. She spent twenty years teaching in New York City public schools.

Abby Carter has been illustrating since she was eleven years old when she started a card business with her grandma. Since then Carter has illustrated a number of books, including Ollie's School Day: A YES-and-NO Book, the Andy Shane books, and Daddies Do It Different.
"The story’s heartwarming, satisfying conclusion sets up further adventures in the series. Short chapters, interesting facts about the zoo animals and wildlife, and illustrations throughout help accelerate the plot. . . . A beginning chapter book sure to appeal to emerging readers and animal-lovers alike"—School Library Journal

"This very early chapter book features large print, a simple vocabulary, plenty of white space, and an attractive illustration on nearly every spread, making it just right for those transitioning from easy readers. The simple information about endangered species is a nice bonus. . . . A warm, engaging series kickoff with a cheerful conclusion."—Kirkus Reviews