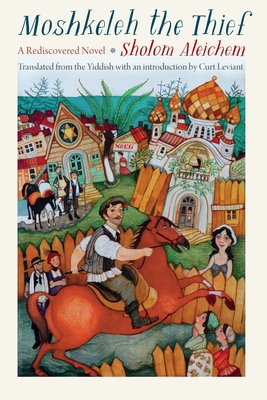 
Not on our shelves. Usually ships in 2-5 days.
This first English translation of Sholom Aleichem’s rediscovered novel, Moshkeleh the Thief, has a riveting plot, an unusual love story, and a keenly observed portrayal of an underclass Jew replete with characters never before been seen in Yiddish literature.

The eponymous hero, Moshkeleh, is a robust chap and horse thief. When Tsireleh, daughter of a tavern keeper, flees to a monastery with the man she loves—a non-Jew she met at the tavern—the humiliated tavern keeper’s family turns to Moshkeleh for help, not knowing he too is in love with her.

For some unknown reason, this innovative novel does not appear in the standard twenty-eight-volume edition of Sholom Aleichem’s collected works, published after his death. Strikingly, Moshkeleh the Thief shows Jews interacting with non-Jews in the Russian Pale of Settlement—a groundbreaking theme in modern Yiddish literature. This novel is also important for Sholom Aleichem’s approach to his material. Yiddish literature had long maintained a tradition of edelkeyt, refinement. Authors eschewed violence, the darker side of life, and people on the fringe of respectability. Moshkeleh thus enters a Jewish arena not hitherto explored in a novel.
Sholom Aleichem, the pen name of Sholom Rabinowitz (1859–1916), became the most widely read writer in the history of Yiddish literature by the end of the nineteenth century. His stories about Tevye the dairyman became the basis for the hit musical, Fiddler on the Roof. Curt Leviant is the prize-winning author or translator of more than twenty-five books. His latest novel is Me, Mo, Mu, Ma & Mod; or, Which Will It Be, Me and Mazal, or Gila and Me?

“This almost-forgotten novel by one of the greatest Jewish writers of all time is revelatory, vividly depicting an all-too-rarely-seen side of Yiddish literature and Jewish life; its rendering here, by one of Jewish literature’s greatest translators, provides a crackling energy befitting its material. Don’t start it too late in the evening; you won’t be able to put it down.”—Jeremy Dauber, Columbia University professor and author of The Worlds of Sholem Aleichem

“This rediscovered short novel by Sholom Aleichem is a gem—a vivid representation of the underside of Jewish life in Eastern Europe, funny, touching, and biting. Curt Leviant has done a remarkable job with the English translation, aptly catching the pungent colloquial character of the Yiddish.”—Robert Alter, emeritus professor of Hebrew and comparative literature, University of California, Berkeley, and author of The Hebrew Bible: A Translation with Commentary

“Moshkele Ganev flies in the face of so much of what we think of when we imagine Eastern European Jewish life. Here, Sholom Aleichem brings us the broadest of visions of that world, not merely by dramatizing the shady characters on society’s margins, but also by inviting us into their emotional lives and uncovering the complicated power structures that can turn them into heroes. For any reader who cares about the Jewish past, this never-before-translated gem will be a revelation—and a delight.”—Dara Horn, author of Eternal Life: A Novel

“More than a century after his death, Sholom Aleichem has a new (or rather a newly rediscovered) book out, and it was worth the wait. Thanks to Curt Leviant for rescuing this unusual love story from obscurity, translating it so beautifully, and, at long last, giving it the readership it deserves.”—Aaron Lansky, author of Outwitting History: The Amazing Adventures of a Man Who Rescued a Million Yiddish Books