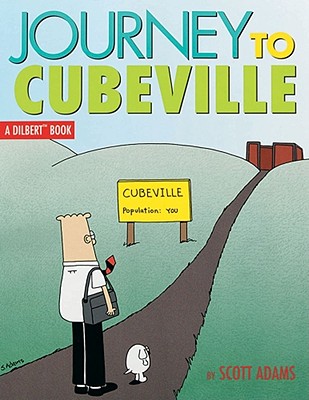 This is book number 12 in the Dilbert series.

"Since Adams parted company with Pacific Bell in 1995, the business he has built out of mocking business has turned into the sort of success story that the average cartoon hero could only dream of."--The London Financial Times

"Go ahead and cut that Dilbert cartoon. Pin it to the wall of your claustrophobic cubicle. Laugh at it around the water cooler, remarking how similar it is to the incomprehensible memos and ludicrous management strategies at your own company."--The Washington Post

Dilbert, Dogbert, and the rest of the world's favorite cubicle dwellers are sure to leave you rolling in your workspace with Scott Adams's cartoon collection, Journey to Cubeville.

Dilbert creator Scott Adams has something special for everyone who thinks their workplace is a living monument to inefficiency--or, for those who have been led to believe unnecessary work is like popcorn for the soul.

Adams lampoons everything in the business world that drives the sane worker into the land of the lunacy:

*Accountants who force you to battle ferociously to get reimbursed for a $2.59 ham sandwich you scarfed while traveling

*Companies spending piles of dough on projects deeply rooted in stupidity, as well as a myriad of stupid consultants
What started as a doodle has turned Scott Adams into a superstar of the cartoon world. Dilbert debuted on the comics page in 1989, while Adams was in the tech department at Pacific Bell. Adams continued to work at Pacific Bell until he was voluntarily downsized in 1995. He has lived in the San Francisco Bay Area since 1979.