Books Under Fire: A Hit List of Banned and Challenged Children's Books (Paperback) 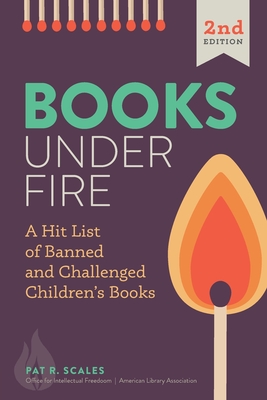 Books Under Fire: A Hit List of Banned and Challenged Children's Books (Paperback)

In our polarized environment, the censorship and outright banning of children’s books which some deem to be controversial or objectionable remains a major concern for libraries. Intellectual freedom champion Scales returns to the fray with a new edition of her matchless guide, updating the focus to titles published since 2015 which have been the target of challenges. School and public librarians, LIS students, and classroom educators will find the assistance and support they need to defend these challenged books with an informed response while ensuring access to young book lovers. For each of the dozens of titles covered, readers will find

Pat R. Scales is a retired middle and high school librarian whose programs have been featured on the Today Show and in various professional journals. She has also served as an adjunct instructor of children’s and young adult literature at Furman University and has been a guest lecturer at universities across the nation. A First Amendment advocate, she is a former chair of ALA’s Intellectual Freedom Committee and serves on the Board of Advisors of the National Coalition against Censorship. She is a past president of the Association of Library Service for Children, and in 2011 received the Distinguished Service Award. She chaired the 1992 Newbery Award Committee, the 2003 Caldecott Award Committee, and the 2001 Laura Ingalls Wilder Award Committee. She writes for Book Links magazine and a bimonthly column for School Library Journal. Her books include Books under Fire: A Hit List of Banned and Challenged Children's Books, Second Edition, Teaching Banned Books: 32 Guides for Children and Teens, Second Edition, and Protecting Intellectual Freedom in Your School Library.

ALA's Office for Intellectual Freedom (OIF) is charged with implementing the intellectual freedom policies of the American Library Association through educating librarians and the public about the concept of intellectual freedom as embodied in the Library Bill of Rights, the Association's basic policy on free access to libraries and library materials. In order to meet its educational goals, the Office undertakes information, support, and coordination activities.

"This comprehensive look at challenged books and their merits should prove an invaluable tool for librarians looking to spark thoughtful conversation in the face of attempted censorship. The appendix includes a thorough list of essays and resources for librarians facing a title challenge; The exhaustive index is a great tool as well."
— Booklist