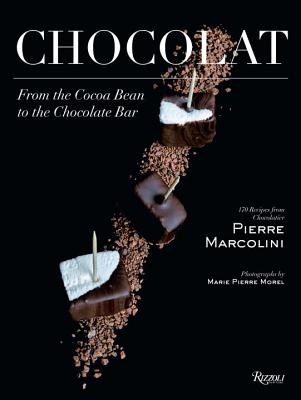 
Special Order - Subject to availability
From the world’s finest chocolatier, who originated the “bean-to-bar” concept, comes this collection of 170 recipes for the very best and most essential chocolate confections.

Belgium’s foremost practitioner of the art of fine chocolate making shares his passion and his knowledge in this extravagantly beautiful volume. Pierre Marcolini’s confections have been acclaimed as the world’s most delectable chocolate creations, and his book is a delicious immersion into the world of fine chocolate and a tribute to its majesty.

Marcolini was the first chocolatier to create his chocolates according to a bean-to-bar philosophy— an idea born from the realization that just as the finest wines reflect the “terroir” in which the grapes are grown, so too would chocolate benefit from careful selection from specific estates. Here, he reveals the trade secrets of the art of fine chocolate making: learn how to roast, grind, and temper the chocolate at home just like the professionals and master all aspects of chocolate making. His recipes run the gamut of chocolate possibilities—irresistible creamy sauces, decadent pastries, bars, truffles, and even a smattering of savory dishes—and are beautifully presented and gorgeously photographed in this handsome volume that no chocolate lover should be without.
Pierre Marcolini is one of the world’s foremost arti- sanal chocolatiers and has won numerous awards. In 1995, he was crowned World Pastry Champion, and opened his first shop in Brussels. Since then, he has expanded to twenty-eight outlets in Belgium, Japan, France, England, Luxembourg, Monaco, and Kuwait. Chae Rin Vincent is a leading food stylist and writer working in the French language. Marie-Pierre Morel is one of Europe’s best-known photographers specializing in food and interior decor.
"CHOCOLAT: From the Cocoa Bean to the Chocolate Bar by Pierre Marcolini, Belgium’s foremost artisanal chocolatier, is a wonder of chocolate creations in an over-the top volume of goodies! Marcolini reveals the secrets of the art of fine chocolate making which involves learning how to roast, grind, and temper the chocolate at home like the professionals.  The photographs of the delicious concoctions actually take your breath away and make your mouth water.  Standouts include crisp milk chocolate-praline clusters; Breton shortbread cookies; chocolate madeleines; chocolate macarons; and chocolate puff pastry."
—Epicurus.com

"To celebrate the 20th anniversary of Maison Marcolini, Mr. Marcolini has wriiten Chocolat: From the Cocoa Bean to the Chocolate Bar. It is both a love letter to his craft and the ultimate guide to chocolate appreciation. It is also one of the best single-subject cookbooks to come out in a long while."
—New York Journal of Books

"This stunning volume is the innovator's mouth-watering meditation of the craft that spans from the bean to the dessert (or savory) bowl."
—Bal Harbour Magazine